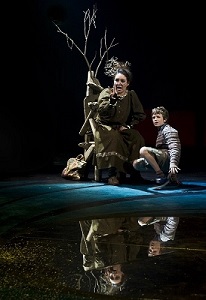 It was with a heavy heart that I made my way to Chichester Festival Theatre yesterday. Not because I was seeing The Witches, I grew up on a diet of Roald Dahl and will vehemently argue that his books are at the very peak of child-centric literature. Neither was it because this was a Chichester Youth Theatre production, I’d not seen the youth theatre before but I had every reason to believe that they would put on a good show. No, my sadness came purely from the fact that we’re approaching the end of a great year of theatre that I’ve been privileged to write about… and this production stands shoulder to shoulder with the big name plays and musicals!

I’m sure you already know the plot of The Witches, whether from the wonderful book or the rather dated film, so I won’t bore you by reiterating it, but suffice to say that David Wood’s adaptation doesn’t shy away from the darker elements of Dahl’s work. We open on a winter night, the night our eponymous lead, Boy, loses his parents in a car crash and is sent to live with his grandmother in Norway (Dahl himself was born to Norwegian parents). The relationship between Finn Elliot’s lost child and his gran is central to the story and if it doesn’t work, quite simply nothing else will either. Thankfully in Beth Church we have a young actress who imbues the grandmother with both familial warmth and an air of mischief as she tells the young lad stories of witches preying on children, all while puffing on her black cigars. Soon enough we’re introduced to a coven of cackling witches, resplendent in blonde wigs and glad rags and sashaying malevolently through them comes the Grand High Witch herself. Imperious, overpowering, equal parts Norma Desmond and Morticia Addams, this is a tour-de-force performance fromEmma Read who, even in a uniformly brilliant cast, stands out as a young talent to keep an eye on, with a voice so wonderfully resonant it puts many professionals to shame! India Loseby’s sycophant witch is a delight too.

The subsequent action hurtles along, the whole piece runs about an hour and a half including interval. Director Dale Rooks marshals her performers admirably making the most of the set pieces including the witches’ annual general meeting and a brilliant restaurant scene (a quick mention to Guy Conroy-Smith and Jack Nash whose argumentative chefs are wonderfully over the top). Of course Boy’s transformation into a mouse is central to the plot and the production makes clever use of puppets, especially in the interaction between Boy and the greedy, grasping Bruno (Sasha Hemingway). They missed a trick though, I’d have snapped up one of their puppets on the spot if they were for sale… especially the frog!

In all then Chichester have done it again, the perfect marriage of the right show, the right cast and the right time. In fact we’ll have to agree with our esteemed chum at The News in Portsmouth… this production is pretty much perfect!