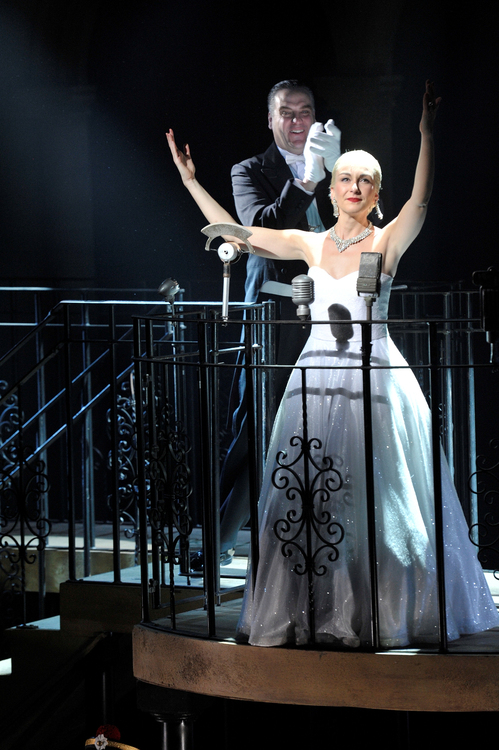 It could easily be argued (and if you’re talking to me it would be) that Evita marks the moment that Andrew Lloyd Webber and Tim Rice really matured and took their rightful place at the peak of musical theatre. Sure, Joseph and Jesus Christ Superstar had been successful, but the sweeping scope of Eva Duarte’s story and the magnificently grandiose score elevated this work to a whole new level. Alright, we might have become a bit fed up with someone trotting out Don’t Cry For Me Argentina at everything from royal variety shows to church hall fundraisers, but when Madonna took on the mantle for the 1996 movie Eva’s story was once again at the front of the theatrical pack.
Fast forward 18 years and after a successful West End revival the show has been reborn on tour. From the off the simple but effective staging is gorgeous and the combination of the band and the cast’s choral singing is chillingly effective. Then we head into Oh What A Circusand it’s immediately apparent that as nicely as Marti Pellow sings, he is no actor. The songs are performed adequately though without emotion and his technique of delivering the punchiest moments with his legs spread wide and his shoulders back is eerily reminiscent of the two actors in Blackadder The Third. I can’t help but feel that a show of this calibre hardly needed name appeal and that a wealth of other actors would have been readily available to play the role more effectively. 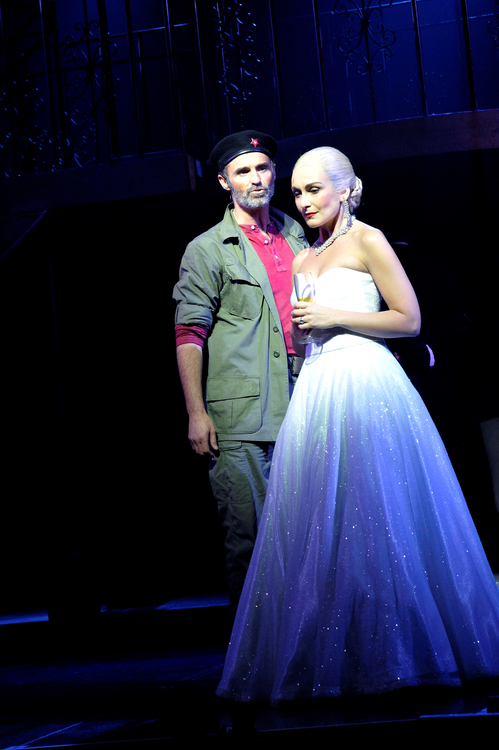 Equally bizarre is the casting of Nic Gibney who struts about the stage as arrogant flamenco singer Magaldi, toting a guitar but quite clearly not being able to play it… if he can’t play along why not just lose the prop entirely? The mind boggles. As Magaldi is coerced into bringing the coquettish  Eva to Buenos Aires  by her pushy family we see Madalina Alberto for the first time, all swishing skirts and shouty vocals. I can’t help thinking it’s going to be a long evening!
The action moves on at an eclectic pace, violent changes of tempo often seeming to take the performers unawares, until we arrive at the benefit gala scene… which is promptly disturbed bya  fire alarm leading to an evacuation from the theatre!
20 minutes later and safely back in our seats the show takes a distinct upswing as Mark Heenehan enters the fray. His Peron is a magisterial mix of statesman and puppet, seizing control of his nation yet seemingly at the whim of the young actress he falls in love with. Almost immediately Alberto’s performance improves and whenever she shares the stage with Heenehan there is a palpable affection that comes across wonderfully. At this point I really have to give praise to Sarah McNicholas who makes the most of her 5 minutes as the mistress, delivering Another Suitcase In Another Hallwith tremulous vulnerability. As the curtain drops on the rousing A New Argentina the audience (this writer aside) are enraptured and clearly loving every second.
After a quick glass of wine we return to Argentina to see Peron announced as President. Don’t Cry For Me Argentina is surprisingly underplayed, a clever move as it stands out from the otherwise punchy performances from Alberto and is the better for it. In High Flying Adored Pellow briefly comes into his own with a really quite lovely vocal.
Rainbow High and Rainbow Tour add some much needed pace to the second act and both are great fun, all the performers revelling in their musical interplay.
The real highlight comes at the saddest moment though as Eva, by this point riddled with cancer and slowly dying in a hospital bed, reaches out to her Argentinos and to her husband with the haunting You Must Love Me (written for the movie and added into subsequent stage versions) – the vocal highlight of the evening. Once again the interplay between Alberto’s Eva and Heenehan’s Peron is touching and, unlike many of the performances around them, seems real. Real enough that, as we return to the funeral scene that opened the show, the stage somehow feels empty without the presence of Duarte!
I still maintain Evita is one of the greatest piece of musical theatre and is directly responsible for so much that was to follow, whether by Lloyd-Webber himself or simply by opening the door for other writers, but this show, despite two great performances at its core, is somewhat lacklustre.

I can’t help feeling Eva deserves so much more…