BARNUM @ The Theatre In The Park, Chichester 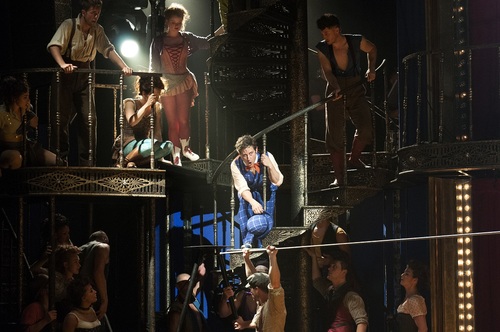 Could there be a more perfect show to christen Chichester’s Theatre In The Park? Certainly Barnum feels right as we walk through Oaklands Park toward what is, let’s be honest, a state of the art tent.
Appearances can be deceiving though, when we step inside the canvas we’re presented with a shiny new space that is eerily familiar to anybody who has set foot in the Festival Theatre. Will the show maintain the big top atmosphere?
The answer is a resounding YES! From the off, as performers cartwheel and flip around the stage or descend from on high on ropes, this effortlessly captures the feel of the circus. In the titular role Christopher Fitzgerald initially seems almost too diminutive for this larger than life figure. He soon puts fears at ease though, effortlessly singing, dancing and acting his way through the piece, whether explaining the art of humbug as he explains There Is A Sucker Born Every Minute, grappling with the tongue-twisting Museum Song or delivering a vocal whilst walking a tightrope in the edge-of-your-seat act one finale Out There.
Throughout Fitzgerald’s energy and movement (there’s an element of the silent movie comedian to the way Fitzgerald moves about the stage) is matched by the steely poise of Tamsin Carroll as Barnum’s ever-supportive, relentlessly realist wife Charity. Their relationship is truly touching in places, even if the lightweight script does effortlessly brush over a number of possible dramatic moments, notably when it’s implied that Barnum embarks on an affair with Jenny Lind, his Swedish Nightingale. You almost wish this relationship were explored further. Instead Anna O’Byrne has to make do with a few good lines and a decent song as Lind, like all the other characters we meet, is glimpsed and then gone before you realise it.
That’s not to say the rest of the cast don’t have much to do. Whilst Fitzgerald barely leaves the stage and Carroll is in most scenes, the rest of the cast move effortlessly from character to chorus and back again, most of them having a moment to shine. Few give off more of a glow than Jack North as the tiny Tom Thumb, who taps his way between the legs of marching soldiers and cavorts with an elephant in one of the most inventive numbers we’ve seen in a very long time.
It’s fair to say that, as a whole, this show is full of innovative flair, Timothy Sheader’s direction and the choreography of Liam Steel and Andrew Wright have crafted an absolute gem. Coupled with Cy Coleman’s knowingly chintzy music and witty lyrics from Michael Stewart this is a wonderful piece, albeit one without much in the way of structure or drama.
Indeed, the combination of perfect venue, talented and adventurous creative team and a wonderfully versatile cast gloss over the scripts numerous flaws and provide a wonderful night’s entertainment that will, unless your heart is carved from rock, leave you grinning from ear to ear.
And that’s a humbug worthy of Phineas Taylor Barnum himself!