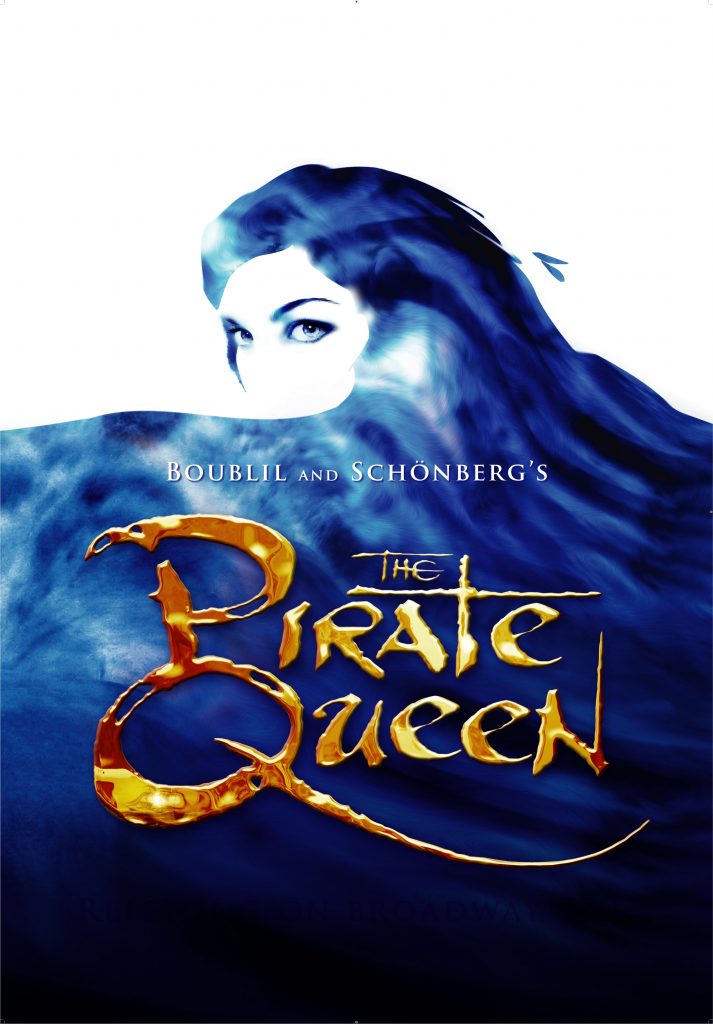 Olivier nominee Rachel Tucker (‘Come From Away’, ‘Wicked’), ‘Britain’s Got Talent’ winner Jai McDowall and Matthew Pagan from Collabro are to headline a star-studded charity gala performance of Boublil And Schönberg’s ‘The Pirate Queen’ at the London Coliseum on Sunday 23 February, 2020, with proceeds going to Leukaemia UK.

Tickets will go on sale to ENO Members priority booking: Thursday 7 November at  12noon
Public booking: Friday 8 November at 10am

Based on the real-life story of history’s Grace O’Malley – an Irish Chieftain and notorious pirate, ‘The Pirate Queen’ is an adventure
chronicling the compelling, inspiring heroine who led an extraordinary life as a rogue, lover and mother in 16th-century Ireland. To protect her people and save her one true love, O’Malley must confront the one woman more powerful than her — her fierce rival, Queen Elizabeth I of England.

From the writers of Les Misérables and Miss Saigon, the show combines classic storytelling and a sweeping score, with the powerful, vibrant traditions of Irish dance and song, to create a modern musical event that is both historic romance and a timeless epic.

It opened on Broadway in 2007. This concert production marks its West End debut.

More cast to be announced. 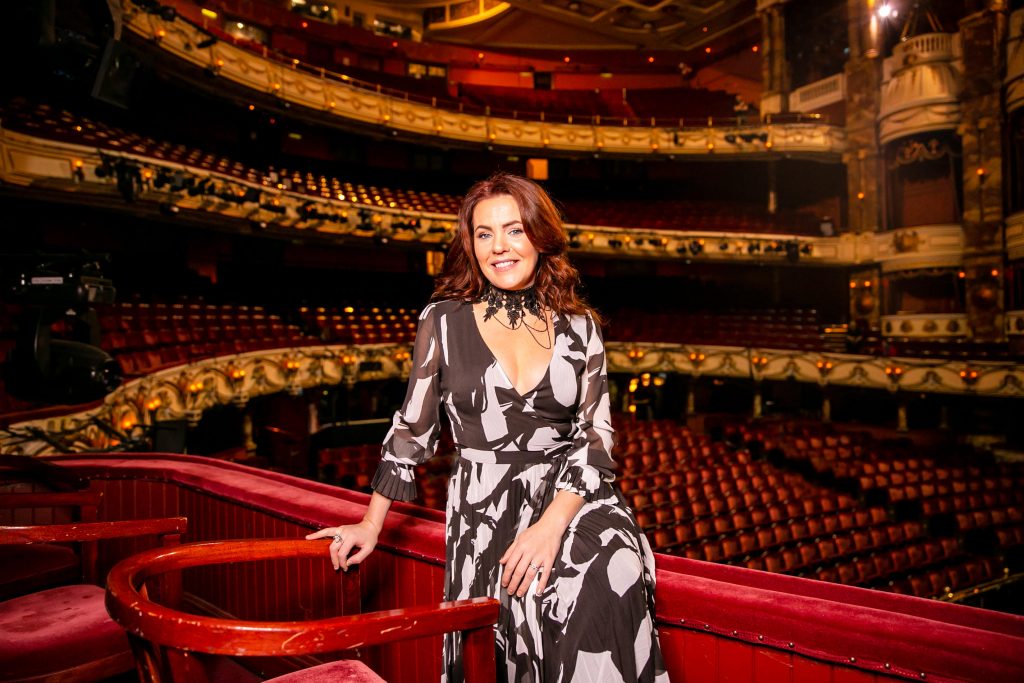 Rachel is currently starring as Beverley/Annette and others in ‘Come From Away’ in the West End, and she was nomiated for an Olivier Award for her performance. Her Theatre credits  includes: ‘Two’ (Bridge House Theatre); ‘The Last Ship’ (Neil Simon Theatre, New York and Bank of America Theatre, Chicago); ‘Communicating Doors’ (Menier Chocolate Factory); ‘Farragut North’ (Southwark Playhouse); ‘Wicked’ (Apollo Victoria Theatre, London and Gershwin Theatre, New York) and ‘We Will Rock You’ (Dominion). For the role of Elphaba in the New York production of ‘Wicked’ Rachel was awarded the 2016 Broadway.com Audience Choice Favourite Female Replacement Award. For the London production Rachel was awarded the 2011 WhatsOnStage.com Award for Best Takeover in a Role.Rachel’s debut solo album ‘The Reason’ was launched in 2013 at her first sell-out concert at the St. James Theatre and she returned to the St. James with her one-woman show ‘Rachel Tucker: Back From Broadway’ for which she won a West End Wilma Award in 2015. In 2017 Rachel launched her first solo tour, ‘Rachel Tucker: Live in Concert’, in London, UK and Ireland alongside releasing a new album ‘On the Road’ for which she also won the West End Wilma Award for Best Cabaret/Solo show.

Born in 1944 of Hungarian parents, Claude-Michel Schönberg began his career in France as a singer, writer and producer of pop songs. In collaboration with Alain Boublil he is the book co-writer and the composer of La Révolution Française, Les Misérables, Miss Saigon, Martin Guerre and The Pirate Queen. In 2008 his new musical, Marguerite, in collaboration with Alain Boublil, Michel Legrand and Herbert Kretzmer opened at the Haymarket Theatre in London. Claude-Michel has supervised overseas productions and co-produced several international cast albums of his shows. In 2001 he composed his first ballet score, Wuthering Heights, which was created by the Northern Ballet in 2002. His ballet, Cleopatra, which opened in 2011, was his second collaboration with David Nixon and his seventh complete score. In 2012 Claude-Michel co-wrote the screenplay and reconceived the music for the Les Misérables musical movie. Golden Globe winner, Oscar nominee and recent Grammy award winner for outstanding contribution to the creative community, Mr. Schönberg married the English ballerina, Charlotte Talbot, in 2003. He is the father of one son and two daughters.

Alain Boublil is the author of the librettos and lyrics for the musicals La Révolution Française, Les Misérables, Miss Saigon, Martin Guerre, and The Pirate Queen, all in collaboration with Claude-Michel Schönberg, as well as Marguerite with music by Michel Legrand. He co-wrote the screenplay of the Golden Globe-winning and Oscar-nominated film, Les Misérables.  He is the author/lyricist of Abbacadabra, a fairy tale musical with songs by ABBA, of the stage adaptation of the Demy/Legrand film, Les Demoiselles de Rochefort, as well as author of the musical play,Manhattan Parisienne, and the play, The Diary of Adam and Eve.  He wrote a prize-winning French novel, Les dessous de soi. His many awards include two Tonys, two Grammys, two Victoire de la Musique and a Molière Award for Les Misérables as well as an Evening Standard Drama Award for Miss Saigon, a Laurence Olivier Award for Martin Guerre and a New York Chapter Honors Grammy for his outstanding contribution to the creative community.  Boublil and Schӧnberg’s 40 plus year collaboration was celebrated in May 2016 at Carnegie Hall as honorees of the New York Pops’ 33rd Birthday Gala.  Boublil was recently appointed to the Board of Directors of the New York Pops.  He lives in New York with his wife, actress/singer Marie Zamora, and is the father of four sons.

Drew trained at London School of Musical Theatre and has been constantly working as a performer and director since graduating. Drew’s directing credits include: Zanna, Don’t! at The Landor Theatre, The Mikado at the Battersea Barge, Jack and the Beanstalk, Dorset Faith at The Courtyard Theatre, London Search for a Twitter Star at The Lyric Theatre, West End, London Children of Eden at The Prince of Wales Theatre, West End, London  The Last Five Years at The Tabard Theatre, London  HMS Pinafore at the Battersea Barge, Our House for HQ Theatres, Beauty and the Beast at the White Rock Theatre; Songs for a New World at the New Players Theatre, London; Snow White and the Seven Dwarfs at the Broxbourne Civic Hall,  Oklahoma at the Riverfront Theatre, The Contender (workshop), new musical by Mal Pope showcased at Wales Millennium Centre and BBC One; Sweeney Todd, Wales Millennium Centre, Cardiff; The Rise and Fall of Little Voice, Llanover Hall; By Jeeves, Congress Theatre; Much Ado About Nothing and Macbeth, Dolman Studios (Newport Shakespeare Festival); A Piece of Cake, Brockley Jack Theatre and subsequently, a transfer to Upstairs at the Gatehouse.  Additionally, Drew has directed various Pantomimes, summer seasons, concerts and reviews in the UK and America. Drew is the current curator of Stages Academy for Floating Festivals and Creative Director for SingEasy West End and Pianoworks.

Ben’s portfolio of designs includes an eclectic range of projects including musical theatre, contemporary circus, concerts, festivals and entertainment shows. Recent projects include the Middle East and Australia tours of The Illusionists – Direct from Broadway, Quincy Jones – A Life in Song and Electric Soul Festival at the O2 Arena, CATS, Mamma Mia! and The Sound of Music In Cyprus and Murphy’s Celtic Legacy on tour in France and the USA. His theatrical designs include HAIR at the Vaults, London, Little Women and The Toy Boy Diaries  at the Hope Mill Manchester and The Mystery of Edwin Drood at the Arts Theatre, London.  UK National tours include HAIR, 20th Century Boy, Noise Ensemble, The Operababes, Hitchhikers Guide to the Galaxy Live!, RENT 20th Anniversary Concert and The Magnificent Musicals. Special event designs include DNA@60 at Hammersmith Apollo, West End Heroes at the Dominion, Twitter Star Live at the Lyric and Children of Eden at the Prince of Wales Theatre. He also completed 10 years of West End musicals for the Larnaca International Festival including The Wizard of Oz, Cats, Oliver!, West Side Story, The Sound of Music, Evita, Chicago, Grease and Fame. In Cyprus his design projects include Living Color Festival 2017 & 2018, The Opening Ceremony of the Small Nations Games, Live concerts from Hardwell, DJ Snake, Nicky Romero, Lord of the Dance, Eifmann Ballet, Jose Carreras, Armin Van Burren, Kremlin Ballet, Moscow City Ballet, MTV.  International projects include Cirque Du Soleil’s ZED in Tokyo – for which he delivered the original lighting and video programming and original video content. Other productions include RED at Ferrari World, Abu Dhabi, Ninjago Live at Legoland Dubai, Duran Duran Live in Tokyo, Noise Ensemble (worldwide), Pam Ann (US National Tour), Las Vegas Fantasy (Taiwan), Red Hot Baroque (Russia, UK and USA). For Peter Schaufuss Ballet Company he designed new productions of The King, Nutcracker and Noddebo Prastegard.

“The Pirate Queen” marks Tom’s producing debut. He worked extensively as a performer in theatre, TV and film (with credits including A Chorus Line, Hairspray, 42nd Street and Channel 4), as well as a creative and concept designer on several theatrical residencies, UK tours and corporate events worldwide. Tom is currently Head Agent of Northbridge Talent Agency and also a creative advisor of The Vyne Theatre, Berkhamsted.

Tickets will go on sale to ENO Members priority booking: Thursday 7 November at  12noon
Public booking: Friday 8 November at 10am

Head to www.piratequeenuk.com to find out more!