It’s the musical that blew Broadway away and for the last month it has been wowing audiences on this side of the ocean too. Just how is a musical about an almost forgotten founding father of the US driving so many Brits wild? Well there’s only one way to find out… you’ve gotta be in the room where it happens!
I’ll be honest, as excited as I was to get my hands on Hamilton tickets I was a little apprehensive too – could any show really live up to the unrelenting wave of hype that has built up around this production? Thankfully early reviews were positive, the majority of the press spoke very highly of the show too (with a couple of notable exceptions I won’t bother to link to here) and I went into the new year eagerly anticipating my own chance to take it all in! 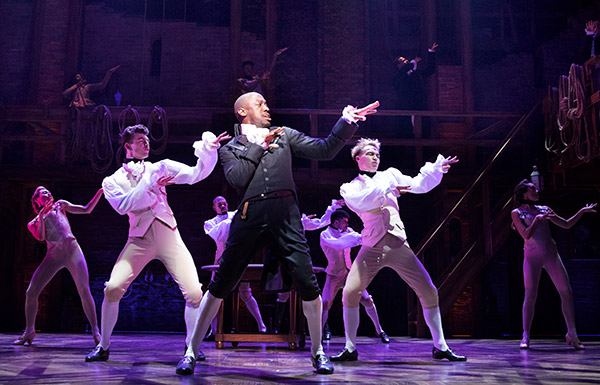 To get straight to the point Hamilton is EVERYTHING you might hope for! Lin-Manuel Miranda has written a piece that is at once gloriously current and utterly timeless. The cast that have been assembled for the London production really do it justice, gleaning every last drop of emotion from each note! It’s a true hip-hop musical. As the genre evolved by taking the music of previous eras, mixing it and using it as the foundation for something new so Hamilton is built on the soundest of musical theatre foundations but subverts them to great effect. From lyrical nods to Gilbert & Sullivan to choreography that has elements of Fosse by way of a deliberately simple and stark set that brings to mind countless prior productions it all feels familiar but when blended together and doused liberally with Miranda’s musical style and lyrical wit it feels entirely fresh and new! 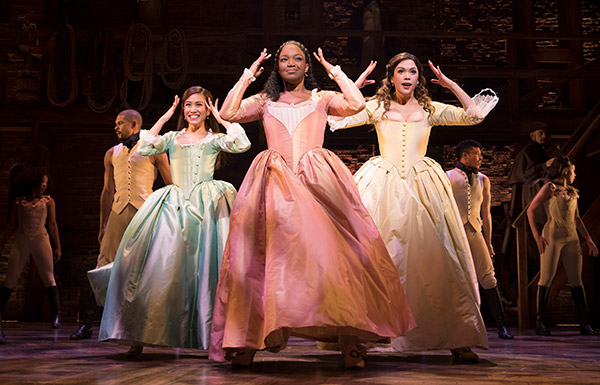 First among equals in this impressive ensemble is Jamael Westman in the title role. He’s remarkably assured for one so young and relatively inexperienced, effortlessly owning the stage from the moment he steps onto it, filling the sizeable auditorium with his presence and voice. Opposite him Rachelle Ann Go is a delightful Eliza, with a voice that I could never tire of hearing and a smile that lights up the stage. She embraces the more poignant elements too, taking Burn, from a soft ballad to an heart-breaking gut punch!
Giles Terera is the man holding it all together, Aaron Burr being our guide through Hamilton’s story. He has a knack for a wry aside and, in Wait For It, delivers my favourite vocal performance of the night, keeping his delivery very simple to let the song speak for itself. 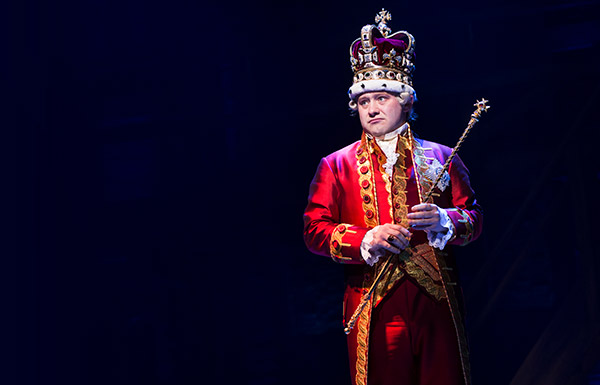 Hamilton’s posse of friends, Cleve September, Tarinn Callender and especially Jason Pennycooke all embody their characters brilliantly and really differentiate between their roles. Pennycooke’s Thomas Jefferson, a sort of Southern Little Richard with a splash of Prince is a particular delight while September and Callender’s rough and tumble Laurens and Mulligan are great fun.
Rachel John is a beguiling Angelica, effortlessly switching from machine gun rapping to soaring vocals and Marsha Songcome, on last night for Peggy/Maria brought humour and sultriness in equal measure.
George Washington is the name that looms largest over the early chapters of US history and it takes a big personality to fill those shoes. Obioma Ugoala proves to be an engaging presence with a voice smoother than syrup, his scenes with Westman’s Hamilton are among the most moving in the show. Michael Jibson gets the biggest laughs and relishes them, barely moving yet holding the audience in the palm of his hand as George III.
I could list all the cast as everyone gets their moment to shine in this true ensemble piece, but don’t keep listening to me, go and try to get tickets for yourself… you’ll regret it if you don’t!

For more information (including new booking availability from Monday 29th) head to http://hamiltonmusical.com/london/