Maxwell Caulfield, Zoë Doano and Chris Peluso are to head the cast of Death Takes A Holiday, the third Charing Cross Theatre musical directed by Artistic Director Thom Southerland following the critically acclaimed Titanic and Ragtime, which has just received an all-time record 14 Off West End Award nominations as well as WhatsOnStage Award nominations for Best Musical Revival and Best Off West End Producton.
A soaring story of the preciousness of life and the overwhelming power of love, the European première of Death Takes A Holiday will run from Monday 16 January to Saturday 4 March.
Death Takes A Holiday has a lush, romantic score by multi Tony Award-winner Maury Yeston (Titanic, Nine) and a book by multi Tony Award-winners Thomas Meehan and Peter Stone. It is based on the 1928 Italian play of the same name, which also inspired the movie, Meet Joe Black, starring Brad Pitt.
In Northern Italy, shortly after World War One, Death disguises himself as a handsome young prince to try to understand why life is so precious and death so feared. But when he unexpectedly falls in love with a newly engaged young woman, this mysterious stranger discovers that love may in fact be stronger than death.
Death Takes A Holiday was nominated for 11 Drama Desk Awards when it premièred Off Broadway in 2011. 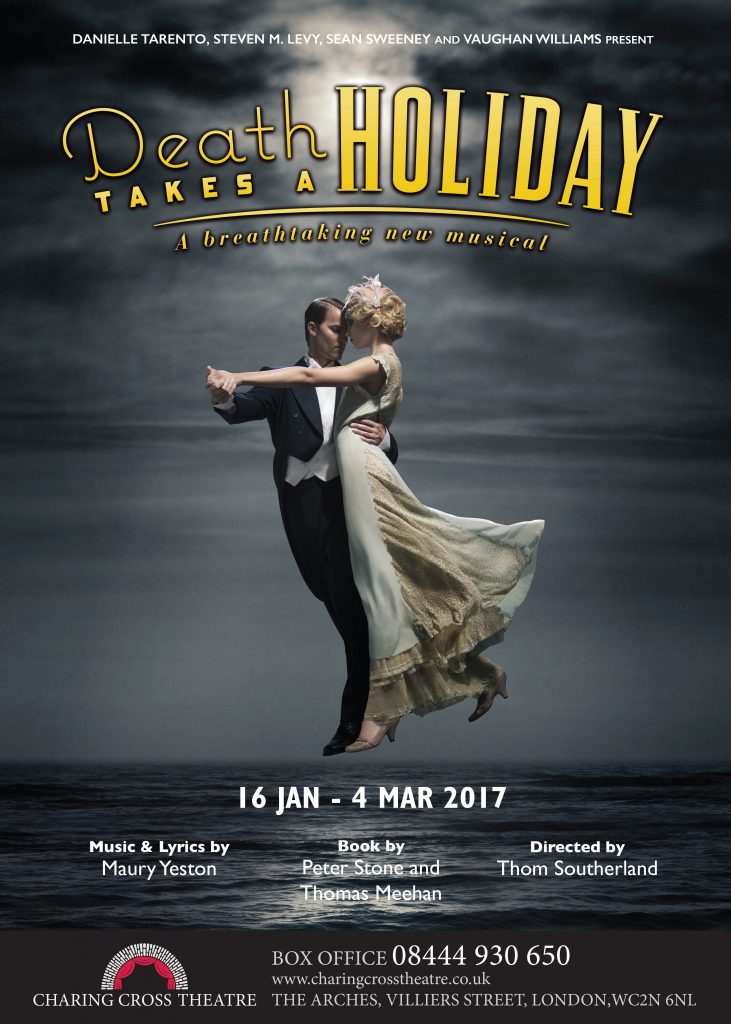 Hollywood star Maxwell Caulfield (Dynasty, The Colbys, Grease 2) made his West End debut as Billy Flynn in Chicago and subsequently played the role on Broadway. He recently starred as Nathan Detroit in the No1 tour of Chichester Festival Theatre’s Guys & Dolls. His other major musical theatre roles include R.F. Simpson in the Chichester production of Singin’ in the Rain, Henry Higgins in My Fair Lady and Count Carl-Magnus Malcolm in A Little Night Music. He also appeared on Broadway in the National Theatre’s multi award-winning production of An Inspector Calls.
Zoë Doano has just finished a year in the West End as Cosette in Les Misérables. Before this she played Johanna in the West End transfer of the Tooting Pie Shop Sweeney Todd. She also starred as Marianne in the European première of Jerry Herman’s The Grand Tour, directed by Thom Southerland at the Finborough Theatre.
American rising star Chris Peluso made his West End debut this year starring as Chris in Miss Saigon at the Prince Edward Theatre and then played Gaylord Ravenal in Showboat at the New London Theatre. On Broadway, he was in the original cast of Beautiful: The Carole King Musical, played Sky in Mamma Mia!, was in Elton John’s Lestat and the Balladeer in Sondheim’s Assassins. He was Fiyero in the US national tour of Wicked. His other major credits include The Glorious Ones (Lincoln Center), Tony in West Side Story, Marius in Les Misérables, Ted Hinton in Frank Wildhorn’s Bonnie and Clyde and Romeo in Romeo and Juliet.

Please note: Chris Peluso appears in the production until 11 February, at which time the role will be taken over by James Gant.

Kathryn Akin was last seen in the West End in Carousel as alternate Nettie to Lesley Garrett, and Gone With the Wind;  Anthony Cable has featured in several West End productions including The Sound of Music, The Phantom of the Opera, Whistle Down the Wind and Napoleon; Trudi Camilleri recently covered the role of  Mother in Ragtime (Charing Cross Theatre); Ken Christiansen was recently Best Actor Offie Award nominated as Grahame Chandler in The Fix, played Ray-Say in The Rise and Fall of Little Voice and was Bob Saunders in Closer to Heaven (all Union theatre);  Scarlett Courtney was Kate Mullins in Titanic in both London and Toronto; Sophie-May Feek was in Made in Dagenham (Hornchurch); James Gant was Etches in Titanic (Charing Cross Theatre), Mr Bumble in Oliver! (Leicester Curve); Rohna and Zinnowitz in Grand Hotel (Southwark Playhouse), cover Javert in Les Misérables (Queen’s Theatre); Matthew McDonald was in Allegro (Southwark Playhouse); Gay Soper was Mrs Strakosh in Funny Girl (Menier Chocolate Factory and West End) and Mrs Alexander in The Curious Incident of the Dog in the Night Time (NT and West End transfer) and Sunday in the Park With George (Menier Chocolate Factory and Wyndhams); Ashley Stillburn’s West End shows include The Phantom of the Opera and Les Misérables and he recently played Anthony in Sweeney Todd for Opera du Toulon; Samuel Thomas was Homer Collins in Floyd Collins (Wilton’s Music Hall), Lansdale in Allegro (Southwark Playhouse) and cover Jamie in The Last 5 Years (St James Theatre); Helen Turner was a finalist in the Stephen Sondheim Student Performer of the Year and  has just played Demeter in Cats.

Thom is Artistic Director at Charing Cross Theatre. His opening season of major musicals, produced by Danielle Tarento, Steven M. Levy, Sean Sweeney and Vaughan Williams, included the return of his acclaimed multi award-winning Titanic and Ragtime (nominated for a record 14 Off West End awards). He was longlisted Best Newcomer in the 2011 Evening Standard Awards for Parade. He was named Best Director at the 2011 The Offies  for Me And Juliet at the Finborough. He directed Allegro, Grey Gardens, Grand Hotel, Titanic, Victor/Victoria, Mack & Mabel and Parade (Southwark Playhouse); The Smallest Show on Earth (Mercury Theatre, Colchester & tour); Jerry Herman’s The Grand Tour (Finborough); The Mikado (Charing Cross Theatre); Daisy Pulls It Off, Irving Berlin’s Call Me Madam! (Upstairs At The Gatehouse); the European première of I Sing!, Divorce Me, Darling!, Annie Get Your Gun, The Pajama Game and sold-out all-male adaptations of Gilbert and Sullivan’s HMS Pinafore and The Mikado (Union); Noël and Gertie (Cockpit); the European première of The Unsinkable Molly Brown (Landor); the European première of State Fair (Finborough & transfer to Trafalgar Studios).

Premium £39.50 which includes best stalls locations, a programme and a glass of bubbly

Please note there are no booking fees on tickets purchased in person.

How to get here: