This House @ The Minerva Theatre, Chichester 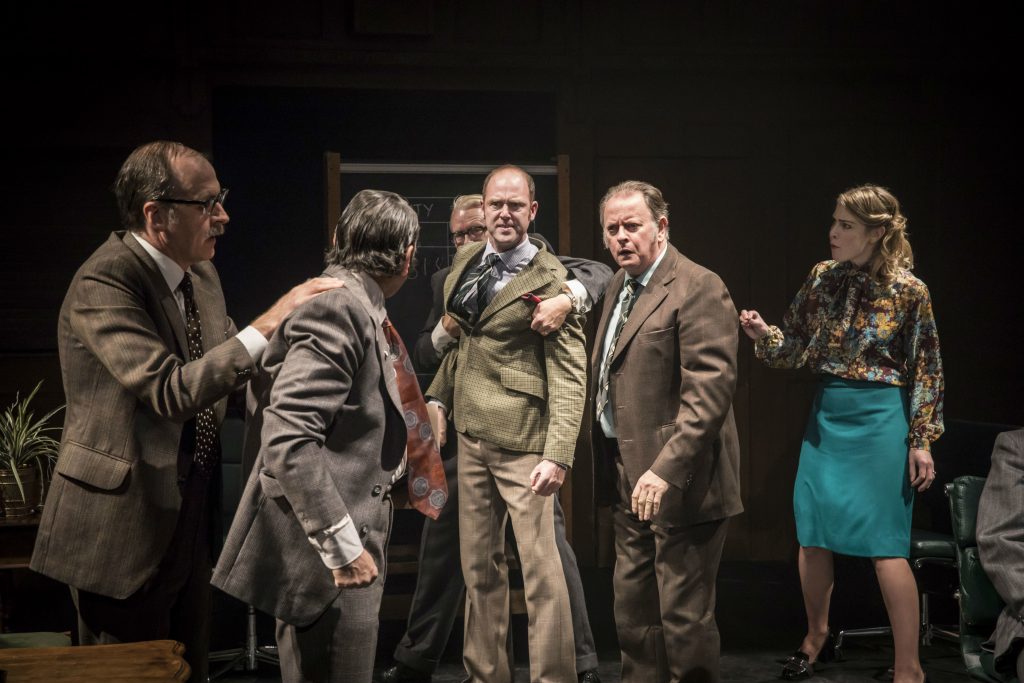 Ahead of Headlong‘s new production of ‘This House’ heading to the West End we dispatched Emma van Kooperen to check it out in the cosy confines of Chichester’s Minerva Theatre.

Political turmoil. It’s nothing new. And we are certainly reminded of that here!

Set during the troubled Labour Government of the mid to late seventies, This House plays out, for the most part, in the Whips offices, the difference between the two like that of a Gentleman’s club to a working mans pub.
Steffan Rhodri as Labour Whip Walter Harrison and Nathaniel Parker as his Tory counterpart Jack Weatherill stand out in a very strong cast, with precision comic timing they manage to keep on the right side of satire. Phil Daniels brash Cockney Bob Mellish was the perfect contrast to the more subdued Michael Cocks (Kevin Doyle) who replaced him as Chief Whip in act two and Malcolm Sinclair expertly embodied the Tory Toff (or Aristotwat) Labour was trying to fight.
There was not a weak link in The Members Chorus with each playing between two and eight parts seamlessly. Christopher Godwin brought a sense of humanity to the chaos as the Member for Batley & Morley in his heartbreaking dedication to the Labour Party. Sarah Woodward brought a touch of anarchy as the Member for Welwyn & Hatfield who upset the establishment by breastfeeding in the Palace of Westminster but it was her Member for Coventry South West who dared to put her constituents before the Labour party which stole the show. Who knew counting out £20 could be so funny!
From the moment you set foot into the Minerva Theatre, you know what’s coming. Rae Smith’s ingenious set transporting you immediately to the House of Commons with members of the audience making up the benches and a projection of Big Ben looming over the set (and I liked the ‘Strangers bar opening for drinks during the interval). The live music by Acoustic Jim & The Wires was a little unexpected but enhanced the atmosphere of the piece, although at times quite loud and overwhelming in a small space it still worked.

In Chichester until October 29th before heading to the Garrick Theatre.