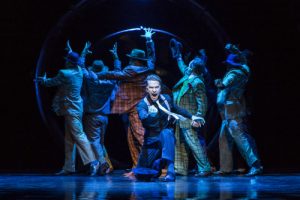 I’ve gone on record previously saying that Guys and Dolls is my favourite musical, in fact for me it’s about as close to perfection as I’ve heard from a musical! I loved this production in Chichester so was excited to see it head to Southampton’s Mayflower theatre.
The mix of Damon Runyan’s characters with Frank Loesser’s music has always been hugely popular and this vibrant production, directed by Gordon Greenberg brings it bang up to date with punchy scene changes and an effervescent energy that carries us from overture to bows! 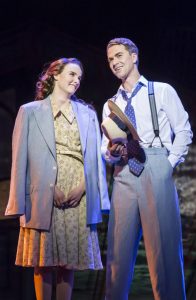 A show like this is only ever as good as the current cast though and thankfully we’re in safe hands. Richard Fleeshman is full of easy-going charm as Sky, swaggering across the stage and crooning some of theatre’s best known songs with cocky ease. He works wonderfully opposite Anna O’Byrne who is, frankly, perfect as Sarah Brown. O’Byrne plays the innocence of the character just on the right side of twee and when she finally lets her hair down it’s impossible not to grin with glee. She sings divinely too!
Maxwell Caulfield is an old hand and, in our experience, a dependable one and he shows me a new side to Nathan Detroit. His Nathan is not the scruffy bum that many others make their take on the character but rather a grinning grifter who charms people into getting what he wants. Lucy Jane Adcock, stepping in for Louise Dearman who has temporarily left the tour to handle other commitments, doesn’t gel in earlier scenes as she drifts into caricature (all too easy when inhabiting such two dimensional character), but she reins in the role admirably in the second act in a great scene with Fleeshman.
Elsewhere Jack Edwards and Mark Sangster are an entertaining pair as Nicely-Nicely & Benny with Edwards giving a storming rendition of Sit Down, You’re Rockin’ The Boat.
The real stars of the show though are the animated ensemble who make the skewed take on New York come alive and brilliantly perform the challenging but gorgeous choreography from Andrew Wright and Carlos Acosta.
This then is a fun, colourful, vivacious show with a cast who are clearly having a ball performing it! Go along, grab a ticket and enjoy an evening in Runyonland!