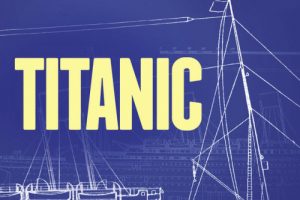 When it docked at Southwark Playhouse Titanic bagged a WhatsOnStage award, a clutch of Offies and plaudits aplenty, it also snagged a transfer to Toronto where another wave of rave reviews from audience and critics alike awaited it. Now it returns as the figurehead of Thom Southerland’sinaugural season at Charing Cross Theatre.
Final casting is announced today for the return of the multi award-winning production of the Broadway musical Titanic, first seen at Southwark Playhouse, which is coming back to London with director Thom Southerland once again at the helm.
Titanic will set sail for a 10-week season at Charing Cross Theatre from Saturday 28 May – Saturday 6 August, produced by Danielle Tarento, Steven M. Levy, Sean Sweeney and Vaughan Williams.
Titanic became one of the hottest must-see shows in 2013, winning  a clutch of Best Musical awards, four and five star rave reviews across the board and and it was Critics Choice in many national newspapers.
In the cast of 20, eight of the originals are back aboard: Scarlett Courtney, Matthew Crowe, Sion Lloyd, Shane McDaid, Philip Rham, Dudley Rogers, Victoria Serra and Judith Street.
They are joined by: David Bardsley, Alistair Barron, Helena Blackman, Scott Cripps, James Gant, Luke George,  Douglas Hansell, Rob Houchen, Claire Machin, Jessica Paul, Peter Prentice, Dom Simpson.
Titanic is the first production in a major season of musicals – including the European premiere of Titanic composer Maury Yeston’s Death Takes a Holiday – announced last month by Southerland on his appointment as  Artistic Director of Charing Cross Theatre.
Southerland, a fast rising star director who has enjoyed considerable acclaim and success with a string of striking Off West End revivals and premieres of major Broadway musicals, including the recent sold-out European premiere of Grey Gardens, said: “I am incredibly excited that Titanic will set sail for London again and will open our new season of Musical Theatre at Charing Cross Theatre. Having created the production in the intimate setting of Southwark Playhouse, it will be wonderful to see Maury Yeston’s epic musical at such close proximity again. Having opened productions of the show in major theatres in Japan and Canada, it really feels like the show is coming home.”

In the final hour of 14 April 1912 the RMS Titanic, on her maiden voyage from Southampton to New York, collided with an iceberg and ‘the unsinkable ship’ slowly sank. It was one of the most tragic disasters of the 20th Century. 1517 men, womåen and children lost their lives.

Based on actual characters aboard the greatest ship in the world, Maury Yeston (Nine, Grand Hotel) and Peter Stone’s stunning musical focuses on their hopes and aspirations. Unaware of the fate that awaits them, the Third Class immigrants dream of a better life in America, the newly-enfranchised Second Class dream of achieving the lifestyles of the rich and famous, and the millionaire Barons of the First Class dream of their hegemony lasting forever.
Creative team: Director Thom Southerland, Musical Staging Cressida Carré, Musical Director Mark Aspinall, Set & Costume Designer David Woodhead, Lighting Designer Howard Hudson, Sound Designer Andrew Johnson

Please note there are no booking fees on any ticket sales

How to get there: