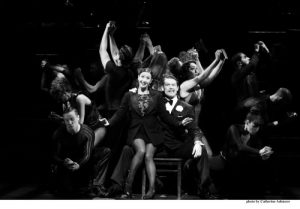 Revisiting a show you know and love can be like seeing an old friend after some time apart. There’s a reassuring familiarity but you can’t help noticing a few things are different since you last met. So it was when I revisited Chicago at the Mayflower Theatre last night.
There’s something about the mix of colourful jazz on a monochrome stage that blends so perfectly with Fosse style choreography to make a sexy, funny and, in a few moments, moving piece of theatre. From the moment the overture hits you you’ll be carried away on a rollercoaster ride. It’s a show that can all too easily cross over into prime cheese territory too… and has on previous tours with rather shaky “celebrity” casting. Thankfully though there are some very recognisable names here they’ve joined this cast on merit, not reputation.
Hayley Tamaddon is a tiny firecracker as Roxie Hart. She gives the character an air of naïve innocence I’ve not seen before, but she soon evolves into a master manipulator when she gets a whiff of fame. Unlike any previous version of Roxie I’ve seen I genuinely believed that she had affection for her downtrodden husband Amos (Neil Ditt). Tamaddon, dwarfed by the rest of the cast tugged at the heartstrings when, on finally being found not guilty, she realises how fickle fame can be and ends up alone on the vast stage. 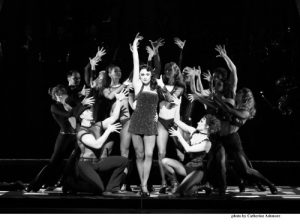 At the other end of the scale Sophie Carmen-Jones’ Velma starts off as a hard assed bitch until the cracks show and she shows she’s just as vulnerable as everyone else. She nails All That Jazz with aplomb, setting the tone for the night to come.
Even ripping his trousers didn’t diminish John Partridge’s sleaze factor as Billy Flynn. As expected Partridge made the most of the dancing and sung beautifully, though I felt his Both Reached For The Gun lacked the sense of fun it normally has.
I always a cringe a little when I see “X-Factor” appear on a show poster but I’ll confess I was very impressed by Sam Bailey who sings beautifully but made the normally two-dimensional Mama Morton into a rounded character with something approximating emotion! I also loved A D Richardson whose Mary Sunshine was a delightfully dotty treat!
The real stars here are the brilliant band and the sensationally sexy chorus though, immersing themselves in the action and keeping up a ferocious tempo that, even with a few technical hiccups elsewhere, guaranteed the audience leaves the theatre happy!