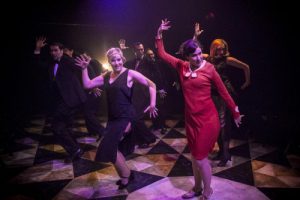 Okay, so I’m a little late to the party, you’ve probably already read a number of reviews of Grand Hotel all raving about it. I can honestly tell you though that they’re all wide of the mark… It’s even better than suggested!
As a show Grand Hotel begs to be given a luxurious, sweeping set on a huge West End stage, but previous attempts to do just that seem to have somehow lost the heart of the piece amid the glamour of staging it. By stripping this production back to a minimum and maximising the use of the avenue setting producer Thom Southerland mines the deepest emotions in the refreshingly minimalist script.
He’s assisted by as good a cast as producer Danielle Tarento as assembled, each wearing their character like a glove as they drift Berlin’s premier hotel over a 48 hour period. Minor aristocracy mix with fading stars and would-be actresses while ‘le jazz hot’ begins to make a mark on German society.
Proceedings are overseen by the watchful eye of Colonel-Doctor Otternschlag, a jaded survivor of The Great War who cynically observes and comments on the comings and goings of staff and guest alike. David Delve, a (very) late addition to the cast is wonderfully sardonic, his black humour providing the tone for the whole show. 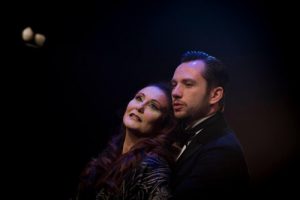 Scott Garnham is already garnering award nominations for his portrayal of Baron von Gaigern and deservedly so. He’s suave, the epitome of cool despite being deep in debt to some shady characters and manages to dazzle the pretty young typist he bumps into before falling in love with a dancer on her eighth farewell tour. Italian musical theatre veteran Christine Grimandi makes her UK debut as past-her-prime ballet star Elizaveta and dazzles. Every movement has meaning and her face tells more story than her voice. It’s a fascinating performance and makes me wish I’d seen her in Sunset Boulevard (someone please give UK audiences a chance to…). She works brilliantly with Valerie Cutko who is perfect as Elizaveta’s incredibly devoted companion Raffaela, and well she should… she took over the same role in the original Broadway production. Victoria Serra is an enchanting Flaemmchen, seemingly innocent, she nonetheless teases and flirts with the Baron in the hopes of being taken to Hollywood. Serra sings divinely and is a dazzling dancer too, with Girl in the Mirror a particular highlight in a superlative production! My favourite performance though comes from George Rae as the naïve Otto Kringelein, a fatally ill Jew who cashes in for one chance to truly live before illness takes him!
For all that this is a character piece, there are some wonderful ensemble numbers, including some incredibly frenetic choreography from Lee Proud who somehow crams the whole cast into the enclosed space with limbs frantically moving in all directions and somehow avoids anyone landing in the laps of the front row! The Grand Charleston is particularly stunning, capturing the hedonism of the years between the two great wars.
This is a production that seems too big for Southwark Playhouse to hold it in and, frankly, if it doesn’t go on to even greater success elsewhere (as Tarento and co’s Titanic did previously) that would be as tragic as the haunting, brilliant end to this production!