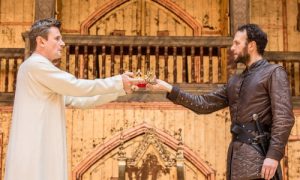 Richard II is one of Shakespeare’s great treats and, for this writer at least, contains some of his most beautiful writing as well as one of the more fascinating storylines in the canon. Somehow though, this is my first experience of seeing it performed live. I’ll confess to having trouble picturing Charles Edwards as Richard.  I’ve always enjoyed Edwards’ work but this is a little bit different to his recent roles.
Thankfully I was wrong (and not for the first time) to be concerned! We’ve seen petulant Richards, childlike Richards and recently Ben Whishaw’s ethereal monarch in the BBC’s majestic Hollow Crown series. Edwards gives us Richard the bon-vivant, letting loose with sardonic asides that his pandering courtiers fall over themselves to laugh at. He’s lost in his own world and thinks himself hilarious, making his eventual fall all the more harrowing. When he realises he is lost and bids his followers sit with him and tell stories of former kings it’s harrowing, especially when, with a lost look on his face he reaches out and clutches the hand of an audience member.
David Sturzaker, who shone earlier this year as Gratiano in Shakespeare’s Globe’s Merchant of Venice is excellent as Bolingbroke, merciless in the face of those who wrong him he nevertheless seems reluctant to take power until he realises it is his only choice.
Director Simon Godwin balances the humour and the sorrow well, taking pains to ensure that the funnier lines hit home. Sadly the dramatic moments fall a little flat as several of the cast seem hell bent on reducing the running time by gabbling through their lines as if they might miss their train home. The exception is William Gaunt who delivers his namesake’s fervent elegy to his homeland as a masterclass in understated grief.
Gaunt’s passionate dismissal of Richard “Live in thy shame, but die not shame with thee!” cuts like a knife and still rings in the ears when the former sovereign meets his end.