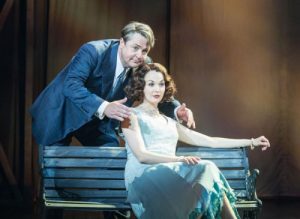 Mack & Mabel has long been known as a troublesome musical, various reasons have been given for why it has repeatedly failed to secure itself a spot as a permanent favourite of the theatregoing masses. After repeated successes with their big summer musicals, the team at Chichester Festival Theatre are setting out to change that!
The first step is to grab a star that audiences will pay to see and in Michael Ball they have not only a hugely popular performer, but someone who naturally brings warmth to the difficult-to-like Mack Sennett. Ball’s vocals are, as always, stunning and he stalks the stage as Sennett. He’s hamstrung by an incredibly clunky script though, frequently bellowing about what year it is to give the audience a little exposition. The show is produced as Mack telling us the story on the day his studios are closing down, but this leads to an odd back-and-forth that makes it feel as if Sennett is never truly part of the action.
Still, as we’ve come to expect, Ball gives an engaging performance. As he opens the show with Movies Were Movies, surrounded by projected images of silent film greats he sets us on a journey.
Mabel is a delivery girl for the local deli who stumbles onto the set at Keystone and is made a star. Fitting then that the largely unknown Rebecca LaChancehas been brought in from Broadway to fill the role. She starts a little slowly, herLook What Happened To Mabel is a little disjointed, but by the time we hitWherever He Ain’t, she’s bold, brassy and belting out those notes!
The rest of the characters are barely cyphers, with little opportunity for scope and development. Jack Edwards has some lovely slapstick moments as Fatty and Anna Jane Casey comes dangerously close to stealing the show as she leads two glorious company numbers!
For all that the script is a clunker, the music is magical! Jerry Herman knows his way round a showstopper and we get a few here. Casey is front and centre for the pinnacle; tapping, singing and leading the cast through a glorious Tap Your Troubles Away, though Michael Ball gets the lead in the gloriousHundreds of Girls, both of which showcase some wonderful ensemble work and the choreography of Stephen Mear. For our money Stephen is the best in the business right now and once again he’s innovative, but with a real sense for classic Hollywood glitz and glam spectaculars!
Jonathan Church directs and isn’t afraid to delve into the darker aspects of the story. At times Mack is a dictator, while Mabel struggles with a descent into drug abuse that will eventually kill her. There’s no happy ending here, just a few fond memories.
Sadly, I don’t think there will be a happy ending for Mack & Mabel either. It’s good enough to make it to the West End and I don’t doubt audiences will spend to see it, but there’s something lacking that means it will never quite scale the heights of Singin’ In The Rain or Herman’s own glorious La Cage aux Folles!