Cider With Rosie @ The Spring, Havant 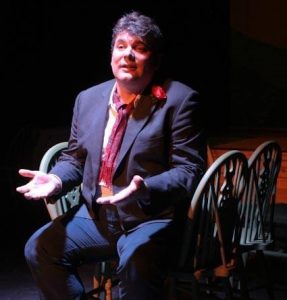 Cider with Rosie is one of those plays… you know, the ones you’ve definitely heard of and you think you know a bit about but that you’ve somehow never seen. Determined to rectify that I was in buoyant mood as I arrived at theSpring Arts & Heritage Centre for Humdrum’s take on Laurie Lee’s life story.
Director Caz Gilmore has sensibly kept things simple for her cast with minimal props, a simple but very effective set of a raised central stage area with a pair of revolving doors in the rear and a small selection of performers who leap between roles with undisguised glee!
Central to the plot is Sean Fisher as Laurie himself, aloof from the action as he looks back on his formative years in a small village near Stroud. Fisher’s performance is superb and he tackles Lee’s poetic lyricism with aplomb, showing the poet’s passion not only for the story but the words he uses to tell them. 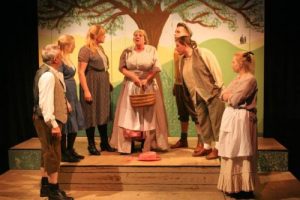 As Laurie’s younger self Sam Sampson is full of wide-eyed wonder at the world around him and his eventual loss of innocence is a poignant moment that, thanks to some excellent direction, seems to hang in the air, marking a point of no return for the young man. His interactions with Jeanette Broad, the matriarch of the Lee brood, are particularly moving and Jeanette’s portrayal is delightful – capturing the anarchy of living in a house full of children perfectly.
The rest of the cast play a variety of roles from mischievous school children to priests and all stops in between. Tony Johnson makes for a touching Granny Trill, getting to the heart of the character’s loneliness and eschewing caricature.Peter Colley’s Baroness Von Hodenburg is a comedic treat, a dotty member of the gentry unable to follow the tune of a song she wrote in tribute to the rolling hills around her home. Lauren Haskett, the titular Rosie, is a charming mix of flirtatious charm and underlying sweetness.
The rest of the cast are uniformly excellent and the whole is supported byAlistair Smyth who leaps between instruments to provide musical support to the plot and occasionally inserts himself into the action too.
Lee’s book has long been a mainstay of “best books” lists and polls, but his pastoral prose comes alive when spoken by talented actors, so head along to The Spring and revel in it!

Many thanks to Russell Blitz for the use of his photos.