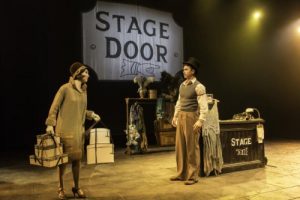 In recent years Chichester Festival Theatre has had a knack of creating hit after hit from fresh takes on classic musicals. I suppose it was inevitable then that they would eventually come to launching a brand new show and with A Damsel In Distress they have. Well, kind of. This is a new show made from well-loved old parts that have been lovingly tidied and stitched together. Theatrical upcycling if you will…
The show started life in the 30s as a book by P.G. Wodehouse, before becoming a Hollywood movie musical starring Fred Astaire, George Burns and Joan Fontaine. It also featured the music of George and Ira Gershwin to great effect, including a wonderful new number in the Wodehouse vein called Stiff Upper Lip. So far, so “Crazy For You”, but for all that there’s little truly fresh or new here the entire show sparkles. Jeremy Sams and Robert Hudsoncapture the feel perfectly, injecting some classic Wodehouse quips and Gershwin tunes into the story while director/choreographer Rob Ashford gives the whole thing a wide-eyed, nostalgic charm.
Richard Fleeshman oozes charm as a Broadway writer whose shows are hits on both sides of the Atlantic, but who longs to find a girl he can rescue. When a fascinating – and very British – young socialite appears at the stage door his life is turned upside down. Summer Strallen dazzles as Maud, the “modern girl” who can’t admit she’s just waiting for a knight in shining armour to sweep her off her feet. 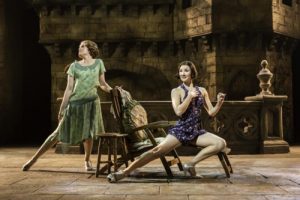 There are wonderful, witty lines aplenty. When Maud and the family secretary launch into Nice Work If You Can Get It the latter giddily exclaims “We’re Dancing Together.”
“The class system is crumbling around us!” Maud replies in just one example of that wonderful Wodehouse wit!
Elsewhere, in a truly sumptuous cast, Nicholas Farrell makes for a charming Lord Marshmoreton, Richard Dempsey is a delightfully plummy toff and David Roberts & Chloe Hart come perilously close to stealing the entire show as the cook and under cook who pitch woo over the Croquembouche!
The most dazzling performance comes from Sally Ann Triplett as a brassy, sassy and sweet American showgirl who belts out songs with aplomb!
This is a show that belongs on the West End stage and I, for one, will be shocked if it doesn’t make an appearance on one in the next year or so!