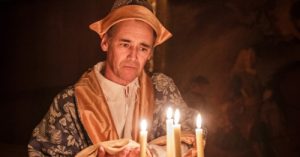 Onstage seating for the West End transfer of Claire van Kampen’s critically-acclaimed new play Farinelli and the King, starring Mark Rylance, will be released to the general public on Friday 5th June at 10am.  Additionally, further seats will be released for all performances, including accessibly priced £10 tickets located in all parts of the house.

Theatregoers who choose the onstage seating, available at a range of prices including £10, will have an up-close and personal experience in the transformed Duke of York’s Theatre. The magical atmosphere of the Sam Wanamaker Playhouse will be brought to the West End with scenes lit by candlelight and live Baroque music played by six onstage musicians, led by harpsichordist and Musical Director Robert Howarth.

Jonathan Fensom, set and costume designer said: “We will be creating in the Duke of York’s Theatre the atmospheric world of an early Baroque playhouse lit by the warm glow of candlelight. The intimate nature of the space will be enhanced by the onstage seating, situated on the left and right of the stage, positioned over two levels that also include seating in the musicians’ gallery, situated above the beautifully ornate Frons Scenae Screen. The audience will be a major part of the onstage picture.”

Set in eighteenth-century Spain, Claire van Kampen’s new play tells the intriguing true story of Farinelli, once the world’s most famous castrato and one of the greatest celebrities of his time, and his decision to trade fame and fortune in the opera houses of Europe for a life of servitude at the court of King Philippe V. Farinelli and the King explores the dynamics between Farinelli and the royal couple and features many of the exquisite arias by Handel, that were first sung by Farinelli in the 1730’s.

Monday – Saturday evenings at 7.30pm and Thursday and Saturday matinees at 2.30pm