As Is Heads To Trafalgar Studios 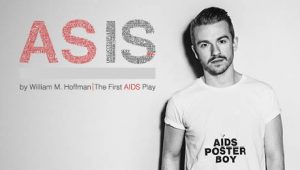 If you’ve ever taken time to listen to Andrew Keates talking about being diagnosed as HIV positive, if you’ve read his tweets or impassioned blog posts or in any way been influenced by his fantastic and inspiring positivity then you’ll know that his story started with this play. Now he’s bringing it to theTrafalgar Studios in an all-new production to highlight a subject that is still seen to be taboo by too many people!

After a sell-out run at the Finborough Theatre in 2013, William M. Hoffman’s As Is now transfers to Trafalgar Studios with a stunning new cast and design. Using humour and sensitivity, As Is shatters the apathy and ignorance surrounding AIDS in the 1980s. Celebrating its 30th anniversary since first opening in New York, where it was hailed by critics as the most powerful play of the year, the significance and urgency of As Is has become even greater as more people than ever before are contracting HIV.

Steven Webb (House of Boys, The Inbetweeners, Betwixt) and David Poynor (The Tempest, Peter Pan, As Is) lead this stellar cast, reunited after appearing together in The History Boys at the Royal National Theatre in 2006/07.

This production provides a vital platform to learn from the past and be informed by the present. There will be a vast array of wrap-around activity including offering rapid HIV testing in partnership with 56 Dean Street Sexual Health Clinic to all those who attend the production along with debates, Q&As and education seminars with eminent speakers exploring subjects concerning those affected by HIV and AIDS. These events are held in partnership with organisations such as the Make A Difference Trust, Terrence Higgins Trust and other notable charities.

Multi-award winning director and HIV/AIDS campaigner Andrew Keatescomments, When I first directed As Is there were three reasons why I wanted to mount a production of this extraordinary play. Firstly, because it is an authentic immediate response to the HIV/AIDS crisis. Secondly, to honour all of those who were lost to AIDS during those impossible times and, lastly, because if as a result of seeing As Is even one person was inspired to get tested for HIV and discovered they were positive then they could receive the vital treatment they needed. I had never dreamed that person would be me (as I spoke about for the MAD Trust at last year’s West End Eurovision). Since my diagnosis as HIV+ it has become my life’s work using the arts to educate and inspire those who may be too frightened to learn the facts and history about HIV and AIDS.

New York City, 1985. Rich (Steven Webb), a young writer who is beginning to find success, is breaking up with his longtime lover, Saul (David Poynor), a professional photographer. However, Rich’s idyll with his new lover is short-lived when he learns that he has contracted the terrifying new disease AIDS and he returns to Saul for sanctuary as he awaits its slow and awful progress.

In a mosaic of brilliantly conceived short scenes, blending humour, poignance and dazzling theatricality, As Is captures the pathos of Rich’s relationship with friends and family, the cold impersonality of the doctors and nurses who care for him and the widely diverse aspects of New York’s gay community. This is a heartbreaking and unsparing examination of a deeply felt human relationship shattered by a mindless, destructive disease. The numbers of gay and bisexual men diagnosed with HIV in the UK reached an all-time high in 2011. So this blistering report from the front-line of the AIDS crisis as it first affected a then-unknowing community is sadly all too relevant to us now, and is both a chastening and enlightening reminder of the struggles of an earlier generation. If only it could be said that we’ve learnt their lessons (Mark Shenton, The Stage).

The production features a dynamic new design by Tim McQuillen-Wright(Carrie – The Musical, Let It Be), a specially commissioned musical score by multi-award winning composer Matthew Strachan (Homefront, Who Wants To Be a Millionaire, About Bill), costume design by Philippa Batt (Dessa Rose, The A to Z of Mrs P, Passing By) and Tobias Fairclough, and lighting design by Neill Brinkworth (Dessa Rose, Accolade and Fair).

As Is was the winner of the Obie and Drama Desk Awards, one of Time Magazine’s ‘Best Plays of the Year’ and nominated for a Tony Award for Best Play. It was originally produced Off-Broadway by the Circle Repertory Company in 1985 and subsequently transferred to Broadway. It was televised in 1986, directed by Michael Lindsay-Hogg.

How to get there

Trafalgar Studios is located on Whitehall. The nearest underground stations are Charing Cross (on the Bakerloo and Northern lines), Embankment (on the Bakerloo, Northern, Circle and District lines), Westminster (on the Jubilee, Circle and District lines) and Leicester Square (on the Northern and Piccadilly lines). The nearest rail station is Charing Cross.