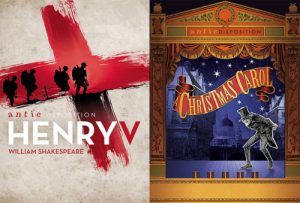 Antic Disposition are renowned for their fascinating site-specific productions of classic stories, whether it’s a visually striking Shakespeare or some of the best loved tales in British Literature their ability to add a fresh and current spin to timeless stories has won them a heap of awards including the 2014 Peter Brook/Empty Space Awards’ coveted Peter Brook/Equity Ensemble prize. Now they’re about to embark on two of Britain’s best known stories performed at stunning Central London locations.

Antic Disposition, founded in 2005 by director Ben Horslen and director/designer John Risebero, are to celebrate their 10th anniversary with two productions, both performed in spectacular site-specific locations in central London.

Henry V will be staged in Temple Church from Monday 24 August – Saturday 5 September.

Marking both the 600th anniversary of the Battle of Agincourt and the ongoing centenary of the First World War, Antic Disposition will stage a new production of Shakespeare’s epic drama in the ancient Temple Church from Monday 24 August to Saturday 5 September.

Performed by a cast of British and French actors led by recent RADA graduate Freddie Stewart in the title role, this uplifting production celebrates the complex historical relationship between our two nations – from the Hundred Years War to the Entente Cordiale. Located in the secluded and tranquil heart of London’s legal quarter between Fleet Street and the River Thames, Temple Church was built by the Knights Templar in the 12th-century and is one of London’s most beautiful and historic buildings. Perhaps best known for its unusual round form and stone effigies of medieval knights, Temple Church became famous more recently as a key location in Dan Brown’s novel, The Da Vinci Code.

Henry V is directed by Ben Horslen and John Risebero, who also designs, with original music by James Burrows and musical direction by Christopher Peake.

A Christmas Carol will again be staged in Middle Temple Hall between Tuesday 22 December and Wednesday 30 December.

Combining the ghostly tale of miser Ebenezer Scrooge with a score of original songs inspired by the carols of a traditional Victorian Christmas, Antic Disposition’s A Christmas Carol has already been seen by over 5,000 people and is now established as one of London’s most magical festive treats. A Christmas Carol will be performed in the highly atmospheric 16th-century Middle Temple Hall, a location well known to Dickens himself, who studied law at the ancient institution. Just a short distance from Temple Church, the stunning hall was completed in 1573 and remains virtually unchanged to this day. With its cobbled alleyways and gas-lit courtyards, a visit to the Middle Temple is a journey into the London that Dickens himself knew, creating the perfect backdrop for this celebration of his much-loved Christmas classic. The historic hall will be decked for the occasion with boughs of holly, and mulled wine, mince pies and other traditional festive fare will be available to add to the Yuletide spirit.

Season Discount: 10% discount if booking both productions in one transaction