Reviewing a show you’ve seen before can be tough, reviewing one you only saw 6 weeks ago ought to be impossible. Thank heavens then for the brilliant cast of Avenue Q who arrived in our hometown of Portsmouth this week. Regular readers will remember we checked out the tour in Winchester back in July (read that review here), so what more could we possibly have to say?

Well, the audience last night couldn’t have been more different from the one in Winchester, there was no polite applause at the Kings Theatre, instead there were belly laughs throughout and during the hospital scene I could even have sworn Sid James was sat behind me!

The heart and soul of Avenue Q is Kate Monster and Lucie-Mae Sumner injects her with such a heady mix of warmth and sassiness that it’s frankly impossible to picture anyone better in the role. Watching her channel emotions through the puppet while giving such a restrained performance herself is fascinating stuff and we suspect any drama students in the audience will have paid very close attention! We’re not ashamed to say that her rendition of There’s A Fine, Fine Line once again had us reaching for a tissue… 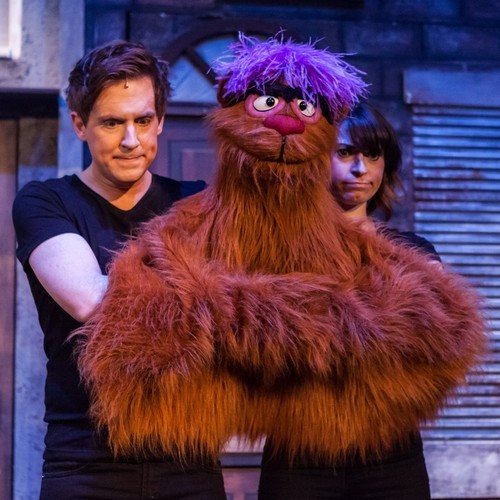 Tom Steedon has grown too since we saw him last and the difference between wide-eyed Princeton and uptight Rod is much more defined by his body language. Perhaps the best physical performance of the night comes from Stephen Arden who becomes his character with every movement and who meshes so perfectly with Jessica Parker whether as part of Trekkie Monster or when the two are Bad Idea Bears that it’s a pleasure to watch. Parker has the unenviable task of puppeteering numerous characters while they are being voiced by other actors too and does so with aplomb.

Ellena Vincent’s Gary Coleman is, if anything, more sassy and in your face than when we saw him last and a real warmth has developed between Richard Morse’s Brian and Christmas Eve (Jacqueline Tate), the latter appeared to be having a little trouble with her voice but worked through it just fine and Morse has taken a two dimensional character and injected real humanity.

We have to give credit to the direction of Cressida Carré who keeps the show moving along but always finds time to dwell on the plays softer moments.

I’ve never really understood why people go back to a show again and again when there are so many different options available, but I can honestly say that the next time Avenue Q heads out on tour you’ll probably find me in the audience at least once.