The Comedy Of Errors @ Shakespeare’s Globe 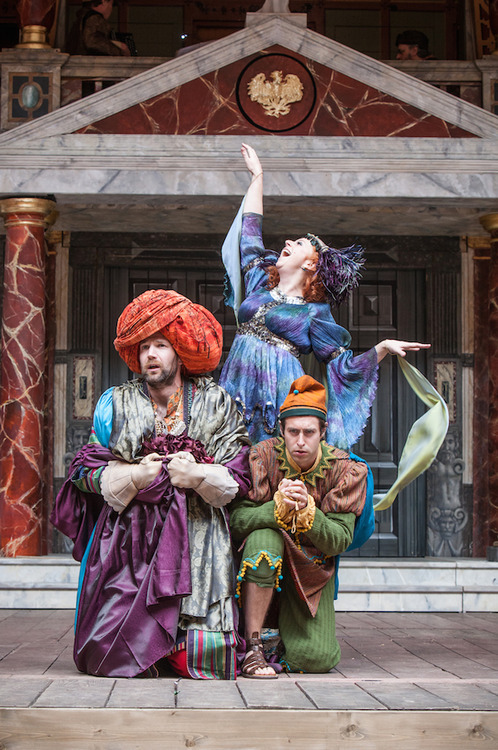 Shakespeare, when it’s performed just right, can bring the house down. In this new production at the Globe they take that idea a little too literally, with props flying across the stage, endless pratfalls and at one point the complete collapse of the set! There’s no subtlety here, but you’ll have all the more fun because of that.

The story, for anyone who doesn’t know it already concerns a pair of long lost twins, both named Antipholus and their servants (also twins separated in the same storm and both named Dromio), one twin travelling from his home in Syracuse to the realm of Ephesus in search of the other. Mistaken identities cause all manner of confusion before all is finally resolved.

It’s fair to say that The Comedy Of Errors lacks the subtlety of Shakespeare’s more popular comedies, but Blanche McIntyre’s production counters with some wonderful physical comedy, with pratfalls, tumbling, a man being beaten with an octopus and even a quick game of Quidditch!

A wonderful pre-show sees the Epheian Dromio trying to collect some voluminous pants from the rafters to great comic effect. It’s a handy trick to warm the audience up as the first scene, in which Egeon, the father of the twins, is sentenced to death is a complete mood killer. Peter Hamilton Dyer and James Laurenson are both accomplished Shakesperean performers, but both rush through their lines in the manner of two people conscious that they might just miss the last bus home. It’s a shame as their appearances later on both give the necessary gravitas to their roles.

Thankfully we soon leave the tragedy behind and watch as Matthew Needham’s Antipholus’ world gets torn apart by the inadvertent meddling of his Syracusian brother. Needham’s look of utter confusion as new events transpire is priceless and his attempts to thoroughly beat his Dromio are superb. Jamie Wilkes comes to the fore in these moments, his slight stature and knack for physical comedy invoke peals of laughter from groundlings and seated audience alike. Simon Harrison’s Syracusian twin can’t believe his luck, finding the locals incredibly friendly being given gold, jewellery and even a wife. His Dromio doesn’t fare so well though and Brodie Ross, lacking the physical talents of his counterpart, makes up for it with the way he relishes some of Shakespeare’s finest insults. When he declares that the cook has amorous intentions and betrays his lack of reciprocation the audience are in hysterics. When he declares “she is spherical, like a globe; I could find out countries in her.” With a knowing glance around the theatre it’s clear he is relishing every word.

The real star here though is Hettie Ladbury who takes the normally shrewish Adriana and gives her a melancholy air, investing in her the slumped shoulders of defeat and the world-weary resignation of a woman who realises her youth has passed her by.

In all this isn’t going to convert anyone who isn’t already at least open to enjoying Shakespeare’s work, but for those of us already converted there are some moments to treasure here!