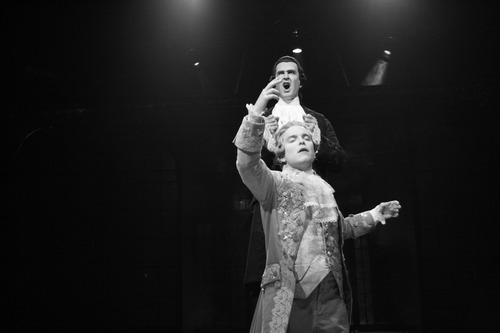 Chichester Festival Theatre has long been a destination for consistently high quality theatre, but in my lifetime at least, it’s never been a particularly nice place to be. You’d turn up at the last minute, see the show and leave. Now, fresh faced after a £22 million redevelopment it’s unmistakeably the same building, but lighter, airier and, despite having an extra 100 seats in the auditorium, somehow more spacious.

After such sterling work on the venue itself you have to reopen with something special, a flagship show to define the season. In Peter Shaffer’s sublime Amadeus they have the perfect play, but could Rupert Everett’s Salieri really be the perfect casting?

The answer, somewhat surprisingly, is yes! Everett stalks the stage like a panther, towering over the rest of the cast in both height and personality, all the while watching, lurking and absorbing every moment that happens around him. He’s funny too, this is in fact a very funny production, I’m not sure I was even aware of how many great comic lines there were here but Everett and his cast mates find them all.

That’s not to say that the drama is lacking of course, Salieri’s ever growing obsession and his resentment to a god he believes has betrayed him is a simple and oft-used dramatic centre point but it’s played out beautifully.

It’s easier to sympathise with Salieri if you have a Mozart who you dislike and there are a number of times I feel the urge to leave my seat and slap Joshua McGuire’s young Amadeus, such is the annoying, almost repulsive figure he cuts. It’s a brilliant portrayal, you hate him for 70% of the play, but as it all begins to slip away from him, you are drawn to how small he looks, a diminutive man, shorn of his wig, wrapped in a ragged blanket for warmth.

As Mozart’s long-suffering wife, Jessie Buckley once again adds warmth and heart in much the same way she did earlier this year for Michael Grandage in Henry V. Hers is an earthy and honest Constanze, a passionate figure who acts as the earthing rod for her husband’s eccentricities.

There are wonderful performances throughout the cast too. Shaffer, as always, writing fantastic moments for his supporting characters. Simon Jones’mildly eccentric Emporer Joseph II is a treat, seemingly bemused by all that goes on around him. James Simmons and Derek Hutchinson as Salieri’s Venticelli are as breezy as their title suggests, wafting in and sharing information with their master before disappearing again. Even Salieri’s cook gets a little moment.

It’s testament to Jonathan Church that minor characters are given the importance they deserve in this piece. His direction is deceptively simple, giving his actors space to breathe and keeping things on an even keel so when extremes of emotion are displayed they hit home beautifully. None more so than when Salieri has the chance to view Mozart’s manuscripts and discovers just how talented his young rival is. It’s a moment as perfect as any I’ve seen in theatre here or elsewhere.

As Chichester celebrates Peter Shaffer as an old friend, I can’t think of any better tribute than this pitch perfect production, it only seems a shame that it has a limited run. That said, it would be a crime if it doesn’t get the West End transfer it so richly deserves!

Our sincere thanks to Emma van Kooperen for the use of her photos.