The Lion King @ The Mayflower, Southampton 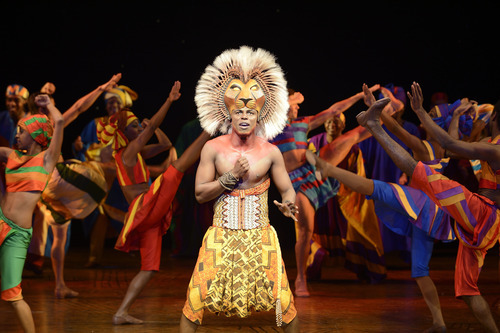 Hakuna Mutata, what a wonderful phrase…

It describes perfectly how you’ll feel after feasting on the visual delights on offer as Disney’s The Lion King takes up residence at The Mayflower.

I first saw The Lion King on stage around 10 years ago. I was blown away as members of the cast took on myriad roles as lions, hyenas and sundry other examples of African wildlife. Back then I was in the dress circle and far removed from the action. Tonight though we were sat in the stalls and whether you’re a child or not I defy you not to be delighted as elephants, wildebeest and even a rhino come dancing past in the aisles, while giraffes majestically pace the stage watched over by hungry cheetahs.

The story of The Lion King needs little introduction, it’s basically Hamlet with a happy ending, but it’s executed brilliantly and from the awed gasps of the young lady behind me it seems even more appealing to children than it is to adults.

As Mufasa Cleveland Cathnott embodies the king of the lion pride, infusing his movements with a sense of power like a coiled spring as he stalks the stage. He’s particularly powerful in his moments interacting with Daniel Daszek-Green who plays the young Simba. He delivers They Live In You with a  delicacy and poignancy that help the audience realise this is more than a live action cartoon. Nicholas Nkuna’s adult Simba cleverly matches his young counterpart, and his moment of maturation is one of the cleverest in the show.

Green’s energy is infectious and he bounds about the stage with glee, clearly loving every second and with a personality that makes me wonder if we’ve just watched a young star in the making. As the young Nala Nicole Manumbre is every bit his equal and moves with a  wonderful poise for one so young.

The villain of the piece, Scar, is played with the sort of sneering superiority that was George Sanders’ calling card.  Stephen Carlile basks in the boos and provides a wonderful counterpoint to the clown like hyenas who are his henchmen. Laughs come from the odd-couple duo of Timon & Pumbaa (John Hasler & Mark Peachey) an opinionated meerkat and his best friend, a flatulent warthog.

The real stand out performance comes from Gugwana Diamini as Rafiki. With a powerful singing voice and a hugely infectious laugh she guides us through the story.

Of course there isn’t a person on the stage who doesn’t get their chance to shine. Particularly in One by One, the opening number of the second act, as the ensemble leap onto stage, running down the aisles, dancing and singing, all clad in vibrantly colourful traditional African attire.

If you’re heading along to watch the show (and you should be, otherwise you really will miss out) take a moment to look up at the percussionists in the two boxes. Their energetic drum beats and fills are as much a performance as what happens on stage!

Quite simply I could go on all day describing what happens in this show, but you’d be better served getting a ticket and taking it all in yourself. You won’t regret it!