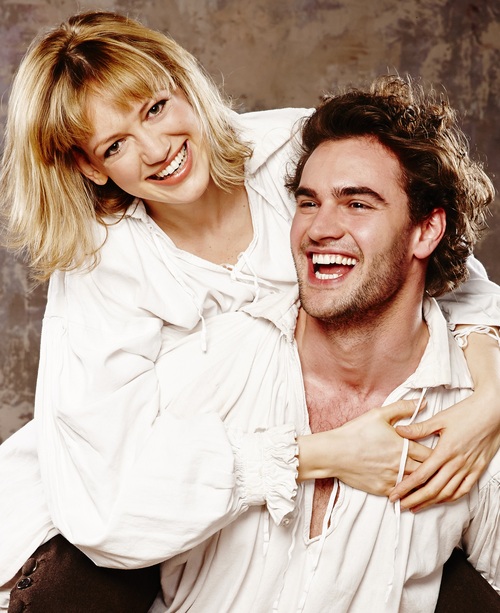 We’re already excited about this new production, partially because it’s a film that we’ve long enjoyed, partially because the Noel Coward has become a favourite theatre of ours during the Grandage season there and partially because we think it can only help bring Shakespere to a younger audience. Now we’re even more excited due to the announcement of Tom Bateman as Will and Lucy Briggs-Owen as Viola! Here’s the full announcement…

Disney and Sonia Friedman Productions are delighted to announce casting for the roles of star-crossed lovers Will Shakespeare and Viola De Lesseps in the forthcoming stage production of Shakespeare in Love.

Tom Bateman’s theatre credits include: ‘Antonio’ in The Duchess of Malfi at The Old Vic; ‘Claudio’ in Much Ado About Nothing at the Wyndham’s Theatre; ‘Richard’ in The Lion in Winter at the Theatre Royal Haymarket and ‘Dante Gabriel Rossetti’ in Lizzie Siddal at the Arcola Theatre. He has played major roles in TV series Da Vinci’s Demons and The Tunnel. Lucy Briggs-Owen’s theatre credits include: ‘Maryna’ in Boris Godunuv, ‘Princess’ in The Orphan of Zhao, ‘Helena’ in A Midsummer Night’s Dream, ‘Luscinda’ in Cardenio and ‘Anne’ in The City Madam all for the Royal Shakespeare Company; ‘Brooke Ashton’ in Noises Off in the West End; ‘Mrs Fainall’ in The Way of the World at Sheffield Crucible; ‘Cressida’ in Troilus and Cressida at the Barbican and on International Tour; ‘Vivie Warren’ in Mrs Warren’s Profession  in the West End and on Tour; ‘Blanche Satorius’ in Widowers’ Houses at Manchester’s Royal Exchange; ‘Sybil Chase’ in Private Lives at the Hampstead Theatre; ‘Cecily’ in The Importance of Being Earnest; and most recently as ‘Olga’ in Fortune’s Fool at The Old Vic.

Shakespeare in Love has its world premiere at the Noël Coward Theatre on Wednesday 23 July 2014, with previews from 2 July. Further casting will be announced soon.

Based on the Academy Award®-winning screenplay by Marc Norman and Tom Stoppard, Shakespeare in Love has been adapted for the stage by Lee Hall (Billy Elliot). Featuring a company of over 30 actors and musicians, this new play will be directed by Declan Donnellanand designed by Nick Ormerod, the driving force behind the world-renowned theatre company, Cheek by Jowl. Shakespeare in Love will be produced by Disney and Sonia Friedman Productions.

Promising young playwright Will Shakespeare is tormented by writer’s block until he finds his muse in the form of passionate noblewoman, Viola De Lesseps. Their forbidden love draws many others, including Queen Elizabeth, into the drama and inspires Will to write the greatest love story of all time, Romeo and Juliet.

This sweeping romantic comedy will transport you back to Shakespeare’s London, teeming with vibrant colours, characters, music and life. Oh, and there’s a bit with a dog!

Tickets for Shakespeare in Love at the Noël Coward Theatre are now on sale online at www.shakespeareinlove.com or by calling the box office on 0844 482 5141.