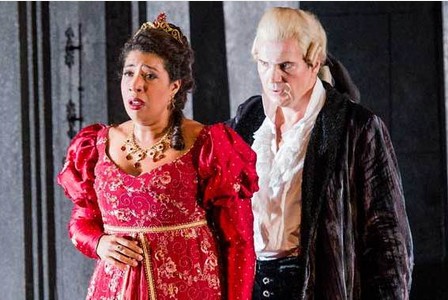 I’ve never been to an opera before. If I’m honest I’m biased by the cliché of a large lady warbling Wagner or a rotund gentleman stood static at centre stage. I’ve always enjoyed listening to opera though so when I saw Welsh National Opera were bringing Tosca to the Mayflower alongside their Tudor season (which we’ll have more on tomorrow – our first guest review!) I thought it was high time that I find out what I’m missing…

For the uninitiated Tosca is a tour de force in all the best that opera has to offer. A superb Puccini score, a wonderful titular character engaged in a superb story in a wonderful setting. It’s clear from the off that this production isn’t being hampered by a lack of budget. The gorgeous set, the interior of a church in Rome, is wonderfully realistic. The same is true of Scarpia’s apartment in act two and the finale’s setting atop Castel Sant Angelo (and as I was stood on the spot they portray only a few months ago I can honestly say they’ve done a fantastic job). Similarly the orchestra is large, lavish and sounds beautiful.

As the piece begins it’s clear that this will be a lot more than just static signers belting out (admittedly beautiful) tunes. The political prisoner Angelotti (Laurence Cole – performing admirably as he steps in at the last minute for Daniel Grice who is apparently ill) bursts into the still quiet of the church, scrambling into a chapel just in time to miss the sacristan who is preparing a scaffold in readiness for the artist and republican Cavaradossi . After an interchange with the sacristan (played by William Robert Allenby who provides the necessary levity to the intense emotion elsewhere), Cavaradossi mounts the scaffold to continue painting the strange and enticing woman he has seen in fervent prayer each day. As he paints his muse he sings of her beauty and mystery, comparing them to the charms of his lover, the celebrated singer Floria Tosca who appears and flies into a jealous rage. The interplay between Gwyn Hughes Jones’ Cavaradossi and Mary Elizabeth Williams’ Tosca is a joy, their voices wrapping around each other beautifully, with Jones’ velvety tenor every bit the equal of the American soprano who is the shows undoubted star!

Cavaradossi sees Angelotti and offers to shelter and protect him, ushering him to safety away from the vindictive chief of police Baron Scarpia. Scarpia senses what is happening but without proof decides to provoke the situation by coercing Tosca into sleeping with him to protect her love. Claudio Otelli makes a sinister, sneering Scarpia and his attempted seduction of Tosca during act two’s phenomenal torture scene in the Baron’s apartments is worth the price of admission by itself. I’d go so far as to say I’ll never see a piece of opera any better than act two here, every performer gives the piece their all, singing beautifully and imbuing the scene with an intensity that demands you don’t look away for even a second!

The third act finds us atop the majestic Castel Sant Angelo, speeding towards the denouement and more intense and beautiful interplay between Jones and Williams. I won’t go so far as to tell the entire plot. I’m sure it will be familiar to many, but equally unknown to others. Suffice it to say this is a tragedy of wonderful proportions!

If you’ve never been to an opera seek out Tosca, seek out Welsh National Opera who do a fantastic job of making the form accessible. From the subtle but very helpful surtitles (all pieces are performed in their original language – in this case Italian) to the excellent programme notes and the passionate team behind the shows everything here is done right. They’ve converted me to opera, give them a chance to convert you too!