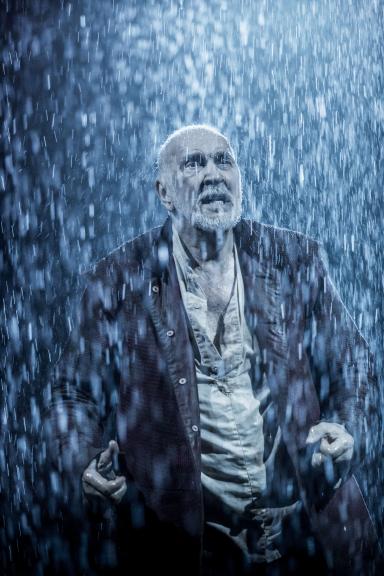 It’s among the most rampant of theatrical clichés that every actor aspires to one day play Lear. Everyone it would seem, except Frank Langella who is quoted as saying “I’ve never waited to play any part. Things happen and I decide OK I suppose it’s time”. Indeed he has turned down Lear’s crown previously, but something about this production appealed to him and thus we find the Oscar nominated actor in the cosy confines of Chichester’s Minerva Theatre.
The rain has been lashing down all afternoon and the ominous clouds seem wonderfully apt as we make our way through the streets toward the Festival Theatre. I must confess at this point that although I’m well aware of Lear and have a comfortable grasp on the plot I’ve never actually seen it on stage or screen.
That in mind I took my seat and soaked up the atmosphere of the simple stage, a throne stands atop battered flagstones, with brick exposed and upright timbers frame the rear in the style of a henge. The atmosphere is palpable, even before Lear’s loyal friends and trusted lieutenants Gloucester and Kent appear. As Gloucester Denis Conway portrays staunch loyalty and warmth both to his king and his sons, whilst the upright Kent, unafraid to speak the truth to his king, is the measure of the perfect soldier, loyal to his station even when he is dismissed from it. Steven Pacey lends a tender nobility to Kent (and, as an aside, played the lead in Blithe Spirit – the first show we saw at the Festival Theatre many years ago). Of course the audience comes palpably to life the moment Langella makes his entrance, exuding a charisma that threatens to overwhelm this tiny space and a rumbling baritone that 75 years have done nothing to diminish. His is a tour-de-force performance, spanning the range of emotions from arrogant anger through fevered madness and finally, broken by grief, sorrow so softly spoken that everyone is on the edge of their seats straining in order not to miss a word. 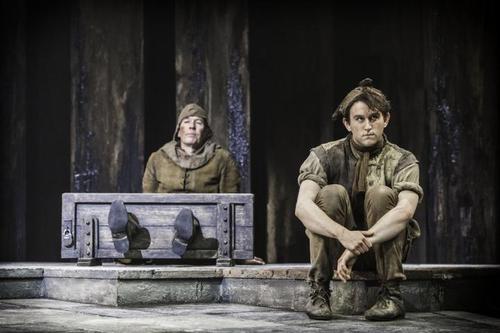 Of course, any Lear can only be as good as his daughters and Langella’s king has some impressive offspring, the icily aloof Goneril is played with restrained anger by Catherine McCormack while her openly evil sister Regan finds Lauren O’Neil relishing the twists and turns presented to her. The loyal and loving Cordelia initially has less to get her teeth into, but Isabella Laughland invests in her a nobility that is immediately stirring.
As the two elder sisters plot to divide up their kingdom in the absence of their younger sibling Gloucester is witness to his own domestic turmoil as his bastard son Edmund, turns him against his rightful heir Edgar. Max Bennett’s brash and cocky Edmund is a joy to behold, smirking and weaselling his way into the affections of Goneril and Regan both whilst simultaneously usurping his father’s title and lands. Sebastien Armesto is initially less impressive as Edgar, but comes into his own as he feigns madness in order to evade capture.
The real breakout performance here though is from Harry Melling. As Lear’s fool he is the only man capable of making the King see the truth of his actions and Melling plays him with a restraint and subtlety that I didn’t expect from the former Harry Potter star.
Angus Jackson leaves his actors plenty of room to interpret their characters without ever straying away from the structure of the piece and the play moves along at a good pace, never sagging and despite so much going on not ever feeling like it’s near three hour running time.
What results from all this is a masterclass in the subtlety and complexity of Shakespeare’s greatest tragedy!