Neville’s Island @ The Theatre In The Park, Chichester 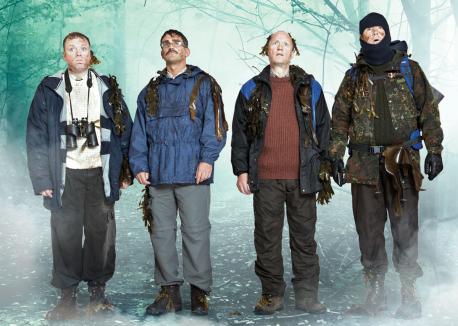 The sun, in my experience at least, always shines on Chichester. This is my third trip this year to the Festival Theatre and each time the weather has been kind. As we stroll toward the gorgeous Theatre In The Park the sun is shining. People are walking dogs and the whole scene is rather idyllic. What a way to start a Friday evening!
In fact, the weather outside is better than what we experience in the theatre itself. One glance at the stage reveals that an incredibly accurate representation of a small island in the Lake District has been put together… it’s raining on the set! Water is flowing around the edge of the stage, gravel, stones and rock are strewn about and undergrowth sprouts out from the backstage area. As sets go, this is very, very good.
As people take their seats (and why is it that the people I sit next to are ALWAYS the last into the theatre?) and the lights dim we prepare ourselves for what is still to come. Suddenly a kagoul clad figure comes hurtling round the edge of the stage, spraying water with every step. It’s a good way to start the show, instant energy from Chichester veteran John Marquez (who was last seen in Privates On Parade at the Noël Coward). Then Adrian Edmondson appears… I’m not going to get into details, you need to see the show for yourself, but suffice it to say that no actor at any theatre will make a more immediate impact with their entrance. Not a single line has been uttered and the crowd are already in hysterics. Tim McMullan and Rufus Hound make their entrances and the entire cast are assembled… What follows involves copious belly laughs, some surprisingly introspective moments and the sort of finale that Tim Firth writes so well (see also Calendar Girls), happy but with an underlying hint of sadness.
So, what of the plot? It’s a simple one, four middle managers are sent on a team bonding session which quickly goes horribly wrong. Marketing man Neville (Marquez) is team leader, convinced that his team have cracked the cryptic clues to get ahead of the opposition on their outward bound day. Gordon (Edmondson) is the realist, having started in the warehouse he’s worked his way up to management and has the pessimistic realist outlook that is guaranteed to rub colleagues the wrong way. Distribution boss Angus (McMullan) is cheerfully oblivious to the world around him, carrying the contents of an entire camping store on his back and the latest state of the art phone in his pocket. Rounding out the quartet is quiet and reserved Roy (Hound), a born again Christian with a troubled past who becomes obsessed with a rare bird of prey he spots on the island.
What ensues is a kind of Castaway meet Lord of The Flies scenario enacted in 24 hour period. The team fall apart as tempers fray and people show their true character. Edmondson’s  role seems tailor made for his acerbic delivery and bulging-eyed incredulity while befuddled Angus allows Tim McMullan to echo Trigger from Only Fools & Horses before he is pushed to his wits end.  Rufus Hound shows a surprising depth in his characterisation, underplaying Roy’s zealous religiousness and imbuing the character with a wide-eyed wonder that’s truly heart-warming. Marquez  draws the short straw with Neville who, despite being the title role is the most two dimensional of the characters here. Unfortunately, while we delve into the past of the other characters, Neville serves more as a means of exposition. It’s not to say Marquez gives a poor performance, far from it… he wrings every ounce of hearty pluck and friendly warmth from Neville, he just doesn’t have the same ground to cover as his fellow performers.
Angus Jackson’s direction is simple, but very effective. Instead of overplaying things he relies on the innate strengths of his performers to wring the last laugh from every joke and keeps things moving at a good pace. He’ll be back in Chichester later this year with a piece as much removed from this as possible – directing Frank Langella in King Lear!
We won’t give away the ending, but suffice it to say that Neville’s Island ticks all the boxes for a crowd pleaser. There are characters here everyone can relate to, in fact you’ve probably worked alongside people remarkably similar to all four of these men. The laughs are plentiful, both from a sharp script and some great visual gags (check the interplay early on as the four try to change out of their sodden clothes into drier attire, all whilst hopping about on the shingle and trying to keep their dignity intact). Most of all though, this is a chance to see four very good actors revel in the chance to simply interact and bounce off each other.