Fiddler On The Roof @ The Mayflower, Southampton 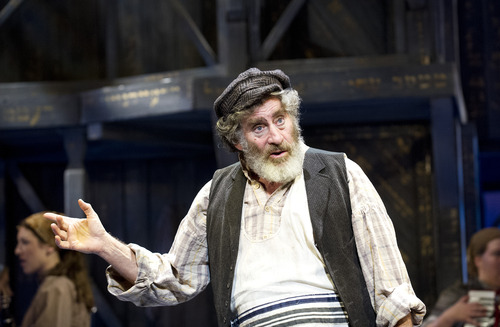 Ah, Fiddler On The Roof, one of those musicals that, if you’ve seen it once every production thereafter feels eerily familiar…

…and with good reason. A quick glance at the production credits in the programme for tonight’s show states that “Mr Robbins’ Original Direction and Choreography reproduced by Craig Revel Horwood” and herein lies the biggest issue with this show… It just feels a little bit dated, a little in need of freshening up and trimming the fat.

That said, if CRH must recreate Jerome Robbins’ direction and choreography he does at least do so with a cast full of energy and, as is customary with his shows, a group of actors who doubl as the orchestra.

Fiddler is a show seen through the eyes of its lead character, when Tevye appeals to his god he is breaking the fourth wall and speaking directly to those of us watching. It’s in these moments that Paul Michael Glaser excels, his natural charm drawing in the audience. Glaser’s Tevye is cheeky and a little mischievous, he’s clearly comfortable speaking directly to a packed house, but when dealing with fast paced songs or quick-fire dialogue exchanges he is prone to stumble slightly over his dialogue (or, as in the case of If I Were A Rich Man, props). Karen Mann who plays his wife Golde shines in their shared scenes, her screeching complementing his soft spoken calmness. While her live wire energy gives her scenes a frenetic pace. The real stars here are their three daughters though, Emily O’Keeffe as Tzeitel, Liz Singleton’s Hodel and Chava – Claire Petzal. Each of the three injects character and life into otherwise two dimensional characters and their three relationships, each doomed to further dismay their parents, are all fleshed out as much as the script will allow.

Tzeitel marries Motel the tailor (Jon Trenchard), going against the match made for her. Hodel’s relationship with Perchick, a student from Kiev whose radical ideas throw the community into disarray, is given the most time to grow before he leaves to join the revolution. Steven Bor plays the student with the strutting arrogance of youth which comes crashing to a halt when he encounters Singleton’s stubborn Hodel. Chava’s romance is the final straw for Tevye as she falls in love outside of the communities Jewish faith, the soft=spoken young Christian Fyedke (Daniel Bolton). Despite their obvious love for each other, her father cannot condone their marriage.

The rest of the cast admirably play a wealth of over-the-top characters, all the while singing, dancing and each of them playing an array of musical instruments. If Fiddler is a show you like, there’s much to love here, the piece is approached with a warmth and reverence and Revel Horwood’s direction tries to glean the most from an array of heartfelt moments. Those of you who aren’t fans are unlikely to be converted though, until directors are allowed to stage the show in their own way (and trim the fat from a couple of scenes that simply run too long) this will be a hard show to sell to younger audiences.

As for me, well I’d see it again, just for the three daughters and their stories. Oh, and a wonderful nightmare sequence! But with this talented and enthusiastic cast there’s something for (almost) everyone!