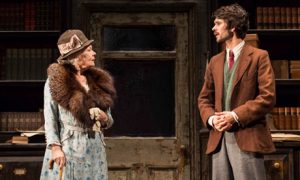 It was in the Noël Coward Theatre during ‘Privates on Parade’, the first of the Michael Grandage season of plays, that the idea of this little site was born. As we sat in our £10 balcony seats the name seemed obvious and the rest, as they say, is history.

So when we returned to the very same seats almost exactly two months later it only seemed right to be reviewing the play we went to see. That I have always wanted to see Dame Judi Dench perform on stage and that she would be playing opposite the wonderfully gifted Ben Whishaw meant that regardless of the content, I was sure of an entertaining evening.

Peter and Alice, as I’m sure you’re aware, is a fictionalised account of a real life meeting between Alice Liddell Hargreaves (Dench) and Peter Llewellyn Davies (Whishaw), the inspirations behind two of the most enduring and well known characters in literature. Characters that captured images of the two as children and that would haunt and hound them through the rest of their days.

When the two meet, at a celebration of Carroll’s work, they do not see eye to eye, the octogenarian Alice seeming to embrace her namesake as much as Davies shuns his, but soon we see them transported back through their memories to their childhood selves (seeing Judi Dench suddenly playing a 10 year old version of her character, with a subtle change in the way she holds her head, an almost imperceptible shift in her gait and the curious, turned-in feet of an embarrassed child is a master class in using the body to convey character).

They interact not only with each other, but with their fictional counterparts and their creators.  John Logan’s script pitching the fictional duo as characters whose world is black and white, as children’s perceptions often are, while the adults live in a world of greys. Olly Alexander’s Peter is cheerfully, almost proudly, uncaring of the world around him, while Alice is judgemental and po-faced, accusing her real life counterpart of over indulging in Laudanum. Ruby Bentall delivers an Alice who accuses with all the conviction of someone who knows their assumptions must be fact, a trait so often seen in young children.

If anything we are bombarded with altogether too much information, there seems no let up and I have to confess that it was only when I was speeding away from London on the train that the full weight of the piece was apparent to me.

In 90 minutes (and without an interval), we see these two individuals thoroughly dissected. Alice first appears withdrawn and defensive, while Peter initially seems far more confident of his place, but we soon learn that whilst Alice gas accepted her lot, Peter is crushed under the weight of his. As we learn in the closing moments of the play, Alice would die peacefully in her sleep three years after meeting Peter. He would descend into Sloane Square underground station one evening after lingering in the bar of a nearby hotel and, as the train approached, threw himself under it’s wheels. Ultimately, what we are left with is the question of whether we should, indeed whether we can, hide from the role that is foisted upon each of us.