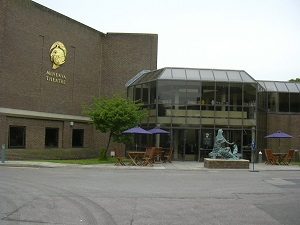 Yesterday we previewed the shows going on in Chichester’s Theatre In The Park for the 2013, season. Today we look at what’s going on next door.
Over at The Minerva, things start off with an old classic as Richard Eyredirects Hadley Fraser and the wonderful Joanna Riding in The Pajama Game, the classic musical love story set against the backdrop of worker unrest and union action in a pajama factory!
This will be followed by the world premiere of If Only by David Edgar(Pentecost, The Life and Adventures of Nicholas Nickleby, both for RSC,Playing With Fire for the National Theatre). A fascinating sounding piece, the press blurb runs as follows, and we couldn’t put it any better ourselves:
It is April 2010, the day after the first prime ministerial debate. Stranded in Malaga Airport by the Icelandic ash-cloud, a Labour special advisor, a Lib Dem staffer and a Tory candidate consider their options. Can their parties survive without them? How will they get home? And who’ll end up in government?
Fast forward to August 2014. As the nation settles down to commemorate the outbreak of the First World War, the three politicians meet again. One of them knows something that could change the outcome of the 2015 election. Should they reveal it? And at what cost?
The Minerva will also host a return of last years The Resistable Rise of Arturo Ui, directed by Jonathan Church and starring Henry Goodman, this classic piece of Brechtian theatre makes a brief return prior to it’s West End transfer. This will be followed by Another Country by Julian Mitchell (After Aida). Set in a 1930’s public school, this piece centres on Bennett and Judd, two young men coming to terms with themselves. One a homosexual, the other a committed Marxist they are forced to confront their beliefs and choices in the face of a scandal that rocks their school.
CFT will close out the year with a Chichester Youth Theatre presentation of Roald Dahl’s The Witches, possibly the most exciting production of the year for me personally, as I grew up immersed in Dahl’s surreal world! This adaptaion is by David Wood, a master at adapting books for the stage who has worked his magic on many of Dahl’s works as well as adapting Goodnight Mr Tom which is currently on tour throughout the UK.
As you can see, there’s lots to be excited about and something here for everyone… to find out more or to book tickets head to cft.org.uk or call the box office on 01243 781312.